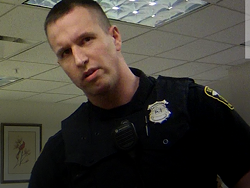 Euclid police officer Michael Amiott, who was captured violently beating a black motorist during an arrest earlier this month, drawing widespread outrage and criticism, is currently serving a 15-day suspension as the city investigates the incident. According to WKYC though, it's not the first time, and not even the first time this year, that Amiott, a three-year veteran of the Euclid PD who was allowed to resign rather than be fired from his previous law enforcement job in Mentor, has been accused of using excessive force.

In video obtained by Channel 3 of an April incident, Amiott is seen forcibly handcuffing a black 16-year-old teenager at the Euclid public library, where he was working off duty. A  city recreation worker has also claimed that Amiott assaulted him during a July arrest.

Cuyahoga County Prosecutor Mike O'Malley told WKYC that he's investigating the officer and that he's been in touch with the Department of Justice, who is also said to be reviewing Amiott's history.

“We have discussed the issues involving this officer with the U.S. Attorney’s Office and the investigation is ongoing,” O’Malley told the station.

The viral video, in addition to the death of Luke Stewart, who was shot and killed by Euclid police officer Matthew Rhodes on March 13 of this year, have been the subject of vocal and continued protests in the city, most notably during this week's tense city council meeting.