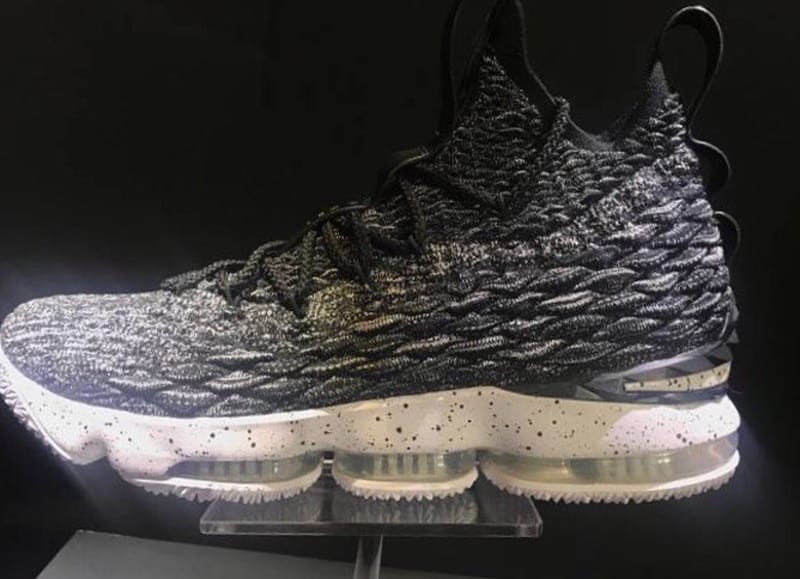 Although the official unveiling of Nike's LeBron 15 isn't until next week, the sneakers were leaked this morning on Instagram by a Chinese sneaker blogger called Sneakerhighway23. LeBron first previewed the sneakers while playing pick-up basketball in Los Angeles earlier t

his summer and then again while wearing the new Cavaliers' jerseys, and posted pictures on Instagram, but there wasn't a clear angle of the sneaker then (see right).

The LeBron 15 is a dramatic departure from past iterations of LeBron's signature Nike sneaker. First off, this is LeBron's first sneaker that doesn't have a prominent display of Nike's signature Swoosh logo. The 15 will also debut two new technologies from Nike: Battle Max, which could be the shock absorbers on the sole of the sneaker, and Battle Knit, an updated version of Nike's Prime Knit, the material on the body of the shoe.

From the speckled sole, to the shock absorbers, the tabs on the heel and the Battle Knit, this is a busy sneaker with many facets to take in. But remember, this is just the first colorway. Once the sneaker is released in more solid colors, it'll dramatically improve the look.

LeBron's 15th signature sneaker from Nike will likely hit retailers at the start of the NBA season in October and will sell for around $185.