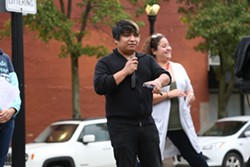 Hundreds of people gathered in Market Square last night to hold a candlelight vigil in the aftermath of the Trump administration's decision to wind-down the federal DACA immigration program. The event was emotionally stirring and quite powerful, even as temperatures dropped and a light, steady rain coated the proceedings.

There were two underlying themes to the evening, though only one was actively planned: 1. Speakers urged everyone to call their elected representatives in Washington and advocate for co-sponsorship of the DREAM Act, a bipartisan bill that is meant to replace DACA within six months. And 2. Dreamers — undocumented immigrants who were brought to the U.S. as children — are very scared about the direction of their lives right now. Many are too frightened to speak publicly on the matter.

Despite that, seven Dreamers shared their stories with the crowd last night. An eighth Dreamer shared an impassioned poem.

Jose Mendez reminded everyone in attendance that this is a human issue, one that demands action rather than simple kind thoughts. "We want them to do their job," he said of Ohio's federal politicians, and the needling they may require from their constituents. "Do it. Don't talk about it. Do it."

After arriving in the U.S. from Mexico at age 7, Mendez said, he attended elementary, middle and high school here before enrolling in college. "I've been here all my life," he said.

Mendez pointed out that the U.S. Congress has six months to act on the matter. "If they do pass something for the Dreamers," he said, "they should not forget about the 11 million undocumented immigrants."

Another Dreamer, a Case Western student who didn't provide her name, came to the U.S. from Honduras when she was 1. "At an early age I knew I was undocumented and I knew that I had to work harder," she said, describing the day of her DACA enrollment as one of the happiest days of her life; she could find a job at 15, and she could pay taxes.

The evening's stories laid bare how the approximately 4,400 Dreamers in Ohio are feeling right now, and how their families fear life-changing disruption.

Perhaps the most powerful moment in the night came when one 17-year-old Dreamer shared her story. She said she hopes to attend Cleveland State University, but that she's terrified for her future now. "This is my home," she told the crowd. "I may not be American —"

"Yes you are!" one man cried out in the middle of the crowd, as cheers and applause rippled throughout Market Square.

"I may not be American by paper," she continued, now visibly choked up. "But I am by heart."