The Pixies Deliver a Career-Spanning Set at the Agora Theatre 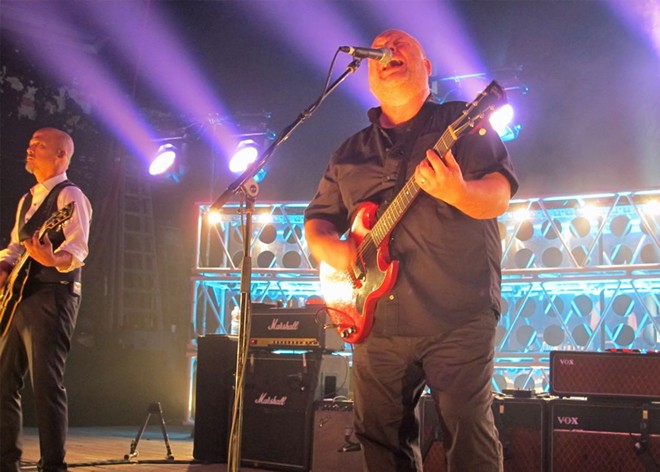 Two years ago, when the Pixies played here before a capacity crowd at Masonic Auditorium, the indie rock band’s PR team sent us a note saying, “For this show, Pixies will pretty much be playing what they want when they want.”

That mentality also held true for last night’s nearly two-hour performance in front of a crowd that filled about three quarters of the Agora Theatre. The well-executed show found the veteran indie rock act digging deep into its extensive catalog as it once again played whatever the hell it wanted.

You can see photos from the show here.

For the entire set, which featured nearly 30 songs, the Pixies would adroitly shift from old to new songs; sometimes the tunes would even segue into each other without much space between them.

Taking a workman-like approach, singer-guitarist Black Francis rarely spoke between songs. At one point, he simply said he had to wipe the sweat off his face, but we think he was actually telling that to his bandmates and not the audience.

The band opened the show with a noisy rendition of “Wave of Mutilation,” a track from 1989’s Doolittle that Francis reportedly wrote about suicide. It would give way to “Classic Masher,” one of the catchier tunes on the band’s latest album, Head Carrier. Eyes closed, sweat glistening from his bald head, Francis sang the track's refrain with his unique intensity. The stocky guy didn't move around the stage much, but he still possessed significant stage presence.

With its jangly guitars, “Talent” came off as a punchy ’60s tune as Francis and bassist Paz Lenchantin effectively traded vocals. Distorted guitars put some spark into “Monkey Gone to Heaven,” and a loud buzzing noise gave way to shards of deafening feedback at the start of the shoegazer-y “Magdalena.” Francis effectively croaked his way through “Cactus,” a track that came off as the kind of tune that you might hear in a thriller. It would be the song that plays when the bad guy goes beserk.

Francis would pick up an acoustic guitar for the brittle ballad “All the Saints,”  and he’d keep playing acoustic guitar for “Ana,” an up-tempo number buttressed by a bluesy guitar riff. “Vamos” provided an opportunity for guitarist Joey Santiago to let it rip. His mid-song solos gave the noisy post-punk song a real lift.

Another highlight, the gentle, Velvet Underground-like “Havalina” featured cooing vocals and successfully showed off the band’s softer side.

The band would ratchet things up again for “Gouge Away.” With its thick bass riffs, the song recalled Joy Division as the Pixies performed it under swirling green lights. “Debaser,” a track the band played near the set’s end, had a similar intensity to it. The group would follow it up with perhaps its best song, “Where Is My Mind.” With its high-pitched vocals and undulating guitar riff, the song remains a post-punk classic.