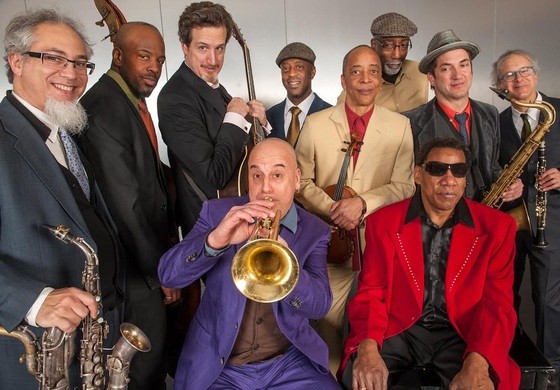 This week’s list features one locally-produced set of concerts by Apollo’s Fire and a gaggle of distinguished visiting artists.

The first event in the Cleveland Museum of Art’s Performing Arts Series matches music with an exhibit. Butler, Bernstein and the Hot 9 will play jazz of the period in Gartner Auditorium on Wednesday, October 11 at 7:30 pm in conjunction with “The Jazz Age: American Style in the 1920s.” You can reserve your tickets online.

Apollo’s Fire Artistic Director Jeannette Sorrell has taken one of George Frederic Handel’s great Biblical oratorios and pared it down to a manageable size for 21st-century audiences. Israel in Egypt tells the story of the enslavement of the Hebrews and their exodus from the yoke of Pharaoh, with not quite so many plagues as it originally took to change that ruler’s mind. Erica Schuller, soprano, Daniel Moody, countertenor, Ross Hauck, tenor, and Jeffrey Strauss, baritone, join Cleveland’s Baroque Orchestra and Apollo’s singers for performances in Akron, Shaker Heights, Beachwood, and Avon Lake from Thursday, October 12 through Sunday, October 15. Tickets can be reserved online.

Turkish composer-guitarist Celil Refik Kaya is the first guest artist of the Cleveland Classical Guitar Society’s new season. On Saturday, October 14 at 7:30 pm, he’ll play music by Mauro Giuliani, Bach (selections from the Goldberg Variations), Granados, Morel, and Rodrigo in addition to his own Sonatina at Plymouth Church in Shaker Heights. You can order tickets online.

CIM’s Callisto Quartet will back up Lithuanian cellist David Geringas for the Cleveland premiere of Anatolijus Senderovas’ David’s Song for solo cello and string quartet during his recital on Saturday, October 16 at 8:00 pm in Waetjen Auditorium at Cleveland State University. The Cleveland Cello Society is the sponsor, and Geringas’ solo repertoire includes works by J.S. Bach, Couperin, Corigliano, and Penderecki, as well as the first local outings for Giya Kanceli’s After Wept and Peteris Vasks’ Book for Cello. The Society will be happy to sell you tickets online.

Now based in Boston, Italian-born pianist Roberto Plano took away the gold medal at the 2001 Cleveland International Piano Competition. He returns to town for a recital on the Tri-C Classical Piano Series on Sunday, October 17 at 2:00 pm in Gartner Auditorium at the Cleveland Museum of Art. His program includes some rare selections by Liszt, Latin music by Villa-Lobos and Ginastera, and Plano’s own solo piano version of Gershwin’s Rhapsody in Blue. You can hear this one for free.

Another guest pianist hails from Hungary. 25-year-old Adam Gyorgy will perform music by Chopin and Liszt as well as his own improvisations on Hungarian folk songs in the beautiful Reinberger Chamber Music Hall at Severance Hall on Monday, October 16 at 7:30 pm. Tickets are available online through the Severance Hall box office.