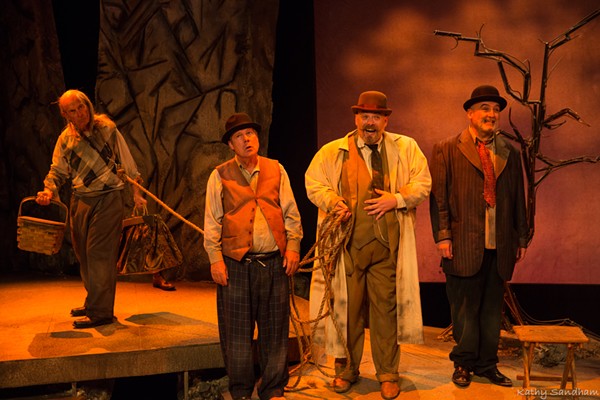 If life is absurd and time has no meaning, then you have no excuse not to see Waiting for Godot at the Beck Center. Because during this brief interlude in your pointless life, the fine actors in this production will, for a fleeting couple of hours, show you what kickass acting is all about. Indeed, they are so damn good you may actually, for a fleeting moment, think life has a purpose. Silly you!

Yes Samuel Beckett’s work, in which Vladimir and Estragon wait in vain for the arrival of a person they have never met but who they are sure will save them, is the ultimate example of Theater of the Absurd. It is not done very often since it requires a director who can suss out multiple beats within aimless chatter, and actors who can enliven the script.

Fortunately, this show has all of that, and then some. Director Eric Schmeidl leads his cast through Beckett’s chutes and ladders with confidence, freeing his actors to find distinct attacks on their roles.

As Vladimir (or Didi), the chattier of the two main characters, Michael Mauldin is frequently upbeat, sure that Godot will appear and encouraging his pal Estragon to buck up. Shaping his silences with as much care as his sentences, Mauldin is a marvel of precision in his detailed pursuit of this character.

He is nicely matched by William Hoffman as Estragon (or Gogo). Using his broad and expressive face to register exhaustion along with momentary bliss at times, Hoffman anchors the scenes between the two characters as they deal with their evidently dead-end existence on this little patch of hilly ground punctuated by one bare, then leafy, tree.

During their two act-two-day stint, they are visited by the slave owner Pozzo and his captive Lucky. Brian Pedaci is riveting as Pozzo, in the first act using his fulsome presence and rich voice to draw a distinction between himself and his hapless slave whom Pozzo pulls around on the end of a rope. As Lucky, Allan Byrne is a crumpled mess of a human being, staring off into the middle distance until he is summoned to “think.” At that time, he launches into a florid, rambling, meaningless discourse that feels uncomfortably similar to recent word-salad speeches by President Trump.

And every day, a little boy (Jake Spencer) visits to inform Didi and Gogo that, once again, Godot will not be coming on that day. But he is sure to be there tomorrow. Like the bar with the “Free Beer Tomorrow!” sign, the men know that this promise will turn yellow with age. Still, if there is no hope, what is the point?

The point is: If you relish fine acting, this is a master class in the art form.