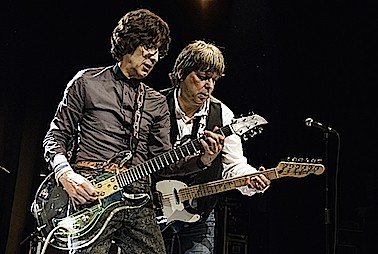 In 2013, Flamin’ Groovies guitarist Cyril Jordan and charismatic lead singer Chris Wilson reunited after three decades to play sold out tours in Japan and Australia. They came through Cleveland that year too.

After getting their musical sea legs back, the guys have now released Fantastic Plastic, their first studio release in more than a decade, and the first album to feature both Jordan and Wilson in 38 years.

The Stones-like opening song, “What the Hell’s Goin’ On,” serves as a swaggering indictment of our times. The album also capably shows off the band’s power pop sensibilities with tunes such as “End of the World” and “She Loves Me.” In separate phone interviews, Wilson and Jordan spoke about the garage rock band’s lengthy history that dates back to the '60s.

The band formed in San Francisco in the 1960s. What was the music scene like there at that time?
Jordan: There was a place on Fisherman’s Wharf, and we’d see William Penn and his Pals play there. They were a Paul Revere and the Raiders copy. They had the coats and the hats, and they played “Louie Louie” and stuff like that. They were part of a garage scene that sprang out of the high school dance scene. There bands like the Count Five. They’re probably one of the only ones that got all the way into the charts. What was cool about the scene back then was that it would go through different phases and morph into something else.

When Chris joined the band in 1971, the band went in a new direction. Talk about the shift that took place.
Wilson: I was getting ready to leave San Francisco when Cyril and George [Alexander] and Danny [Mihm] sat me down and said [singer] Roy [Loney] had given notice. They had a bunch of gigs coming up. They said, “We need somebody. You fit the bill. Would you like to be in the band?” I thought, “What the hell.” I gave them my ascent and packed up my gear from where I was sleeping on the floor and got a Murphy bed at Danny’s house. Then, I moved in with Cyril and his mom, who kind of became my mom. I was there for the next eight years. In those days, the sound didn’t change right away. The change slowly came as Cyril and I started to find our feet as songwriters. That didn’t happen until 1972. We’d written a few things back then, including, “Let Me Rock,” which is on the new album. Shake Some Action was really the beginning of our sound.

Jordan: There was this weird notion that we changed when Roy [Loney] left, but even after he left, we were doing “Slow Death” and there was still an R&B side to our sound. Because Chris and I could sing like the Everly Brothers, we could do these different tunes that had nice harmonies that wasn’t possible with the lineup we had with Roy. The tools changed. We got better tools and I’ll be damned if we weren’t going to use them. Chris an incredible mimic. He can do Daffy Duck and Little Richard. He can do everybody. I thought I could write a Rolling Stones type song and we can have a Jagger-type vocals. He was an incredible tool of talent. I try to explain that the Flamin’ Groovies format is basically a showcase for all their different talents. At this point in time, I look at the band, because of how many members have been in it and left, that I found these people and brought them into the band. I even brought Danny into the band. I chased him down for a year and a half. I pulled him in. I’ve designed and arranged the music of the band since Flamingo. That’s when I really kicked in. Roy and I drove back from L.A. one night and wrote like eight songs on the drive back. By the time we got to San Francisco, we had an entire album.

What did you like about working with Dave Edmunds?
Wilson: Dave was fantastic. We were over at our pot dealer’s house and we’d be playing records and chatting and doing what not. Cyril had brought [the Edmunds single] “I Hear You Knocking.’” The guitar sound just blew me away. It just wiped me out. I went, “That’s what I want to sound like. That’s the kind of music I want to do.” Folk rocky but powerful as shit with lots of guitars, and Cyril said, “That’s me too.”

Jordan: It was surreal. I’m still pinching myself. It was like it as too fuckin’ good to be true. We heard [his] “I Hear You Knocking,’” and we were like, “Holy shit. What the fuck is this?” I found out it was cut at this place called Rockfield. I immediately realized that Rockfield had a sound as unique as Sun Records or Goldstar, where Phil Spector worked. I told them we had to go there. Everyone laughed at me. Three years later, I pulled it off. I went to London and did a deal with United Artists. He had set up these interviews with Melody Maker and these other magazines. They asked me who was going to produce the album. I told all these guys that Dave Edmunds was going to produce us. Edmonds hadn’t been notified. He didn’t find out until the afternoon of the session when he read about in Melody Maker. He went to the studio and the owner told him that he was producing us.

Most of the songs on the new album are new ones?
Wilson: Most of the songs are new. They were recorded in the last three years. Their collaborations mostly with Cyril and I. Cryil wrote some of them by himself, like the instrumental, which I didn’t have much input on though I play a 12-string on it. All those other songs date from 2013 onwards. We finished it about a year ago in last October.

Jordan: When I had my band Magic Christian, I never wrote so much in life. I was playing the guitar five hours a night. We cut about 50 originals. We only released about half of them. There’s another 25 without vocals and lyrics. I would write a song that was just for the Flamin’ Groovies, but I’d shelve it. All of a suddent, we were forced to put out the album out and did a deal with Severn. We used two session guys that work with the Fabulous Thunderbirds. We had to finish it and I took one of the shelved Magic Christian tracks, which is the instrumental. I shelved it because it was too Flamin’ Groovies like. It’s the first album that was kind of a hash job. This album took three years because people don’t live in San Francisco anymore. The only time we could record was when we were rehearsing for a tour.

Where did you go to record Fantastic Plastic and what was the experience like?
Wilson: We recorded at Studio D in Sausalito with our produce Joel Jaffe, who has a couple of Grammys under his belt. He’s a wonderful fellow to work with. Nothing but helpful. There wasn’t anything we needed that we couldn’t get. It worked out really well. I’m extremely happy with how it turned out. I haven’t been this happy with anything I’ve recorded in many years. I’ve done lots of records with other bands too, but I think there’s something special in a lot of these songs.

Do you anticipate it’ll be another 14 years until you release your next studio album?
Wilson: I certainly hope not. You never know. I can’t see myself at 77 but then again I hope I still am making records at 77 if the Lord gives me the wherewithal to stick around ’til then.

Jordan: I don’t know. I don’t think I’ll be around that long. I had polio when I was a kid. I was going to die. I had six months to live but survived it. It gave me this idea that every day I could die, I could drop dead. Now that I’m old it’s glaring me in the face. Tom Petty just dropped dead. Jesus Christ! That is such a bummer. He just got better and better and better. It was great to see him flower.