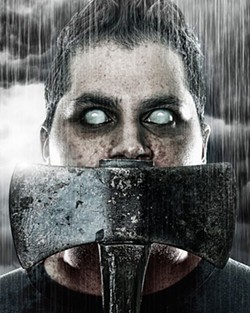 Writer-director Adam Green says that after Hatchet III came out in 2013, he was “done” with his Hatchet horror trilogy and had no intention of revisiting the series. In fact, he’d even become “disenchanted” with filmmaking.

“If you were to ask [filmmakers] George Romero or Wes Craven, they all created these things that became very big,” he says in a recent phone interview. “But they never got anything for it. I would see the [Hatchet] comic books and Halloween masks and wonder how I have never gotten a dime. I was starting to hate it.”

Then, he went through what he describes as “a horribly dark period” of his life during which a friend overdosed on heroin and died. Green also filed for divorce, and then, his friend Craven died.

“When [Craven] died, everyone started calling each other,” he says. “The common feeling among my generation was that we haven’t done anything that mattered. We couldn’t compare to the guys we idolized.”

Two months after that, Romero asked him to moderate a panel. At the end of the panel, he put his arm around Green and gave him so advice on how to soldier through setbacks.

“He said I have to be crazy if I don’t see that Hatchet is that [special] thing,” Green says. “He said I couldn’t let the fact that I didn’t get anything from it stop me. He told me I had to keep doing it.”

And with that, Green set out to create Victor Crowley, a sequel that takes place ten years after Hatchet III. The film, which screens at 7:30 p.m. on Wednesday, Oct. 18, at the Capitol Theatre, centers on Andrew Yong (Parry Shen), the lone survivor of a 2007 incident in which 49 people were torn to pieces in Louisiana’s Honey Island Swamp. Young claims that Victor Crowley (Kane Hodder) was responsible for the massacre. When Crowley is mistakenly resurrected, Andrew must face the man.

Green will attend the screening at the Capitol and be on hand for a Q&A afterward.

Green says that Hodder, the veteran horror film actor who played Victor in the previous films, will continue to play Victor as long as he has a say over the matter.

“He’s been involved in every single thing I’ve ever done,” he says of Hodder. “If he’s not acting, he’s stunt coordinating. He’s always there. [Victor] is all him. It’s always fun to work with him.”

The setting is significant. Years after the killing took place at Honey Island Swamp, the place has become a theme park.

“That’s a commentary on our society and the way we celebrate serial killers,” Green says of the setting. “In the film, there’s a group of filmmakers trying to make a mock trailer to raise money, which is what we [literally] did to make the first [Hatchet film]. Three of us went down to New Orleans and did that and that’s how we got the financing. The one survivor is brought back to the swamp to do an interview on the tenth anniversary, and they wind up resurrecting Victor by mistake.”

Much of the movie takes place inside an airplane, and Green says that challenged his skills as a writer.

“Because of the claustrophobic setting, you have to work on the characters," he says. "That’s added a layer of suspense to this one that the other films didn’t have. The other ones weren’t scary. They were fun and violent and gory. This one has some great scares in it. I see people [in the audience] cowering and covering their eyes. It’s something new for the series. I can’t wait to get on the road and see how people react.”