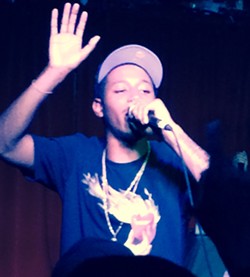 For his first visit to Cleveland, rapper Cousin Stizz wore a dark shirt, a Red Sox hat and gold fronts in his teeth. He took them out to sip from a clear plastic cup of cognac that sat on the DJ booth of the Grog Shop stage, microphone gripped in his palm as the molded metal grill balanced between his fingers.

The gold flashed every time he smiled, which was often.

His shirt was emblazoned with a hand carefully – almost daintily – holding a blazing heart. It seemed like an apt image for his performance – setting something ablaze that might be just as beautiful on its own, but, hey, here we are, and who doesn’t like a little fire?

The Bostonian has made a name for himself over the last three years with spell-like, hypnotic mutterings that seldom strain the voice. His voice is low and tempered, 21 Savage in his deadpan delivery but with a heftier dose of lyrical dexterity. Over churning, hazy, ominous trap beats, he paints grim portraits of city life that emerge like Piet Mondrian in their apparent simplicity. He’ll borrow Migos-like syncopations and Atlanta trap sensibilities, nods towards Uzi Vert’s youthful “Yeah” suffixes, all with a precision that brings to mind the best of '90s East Coast boom-bap rappers.

It’s challenging to perform low-energy rap music live, but Stizz gave it a good go. Teasing out the supreme yell-ability of his simple, catchy hooks, he transformed songs that in headphones might be controlled and sticky into performance that tested the sprung floor of the Grog Shop as the crowd jumped along.

Careening renditions of “Headlock” and “Dirty Bands” got the small, dedicated audience moving, hands bobbing in anticipation with the first note of the introductions. Stizz found a congregation receptive to the rumbling chants of “Every Season,” “Lambo” and “No Bells,” a couple hundred voices filling the Coventry club with the straightforward refrains. He called the crowd his cousins while wiping sweat from a brow, and expressed an earnest appreciation for the reciprocal energy. On his first proper national headlining tour, Stizz took every opportunity to highlight his DJ, his openers (Roc Nation signee Levi Carter and right hand man Big Leano) and even his camera man. It’s definitely endearing.

As he becomes more seasoned, Stizz will have a chance to move away from the high energy ambience that characterizes most emerging rap shows and refine his performance to lean into his mesmerizing beats and highlight his ability to spit pointed, laser-focused lyrics. This is the heart of his music, and the flashes of these moments – a four-bar stand-out sequence during “Neimans Barneys,” the boiling rat-a-tat of “Paper Calling” – came with a ferocious glint in his eye and an unexpected snarl. These were the instances that stirred up those unique "Damn, I love live music" twinges in your chest.

Stizz hit the final stretch with the song that nabbed a Drake cosign, “Shoutout,” another pared down, spaced-out track whose repeating chorus (“Shout out to the money from the drugs”) came off as a resigned, tongue-in-cheek shrug to the reality of the hustle. At the last moment, he tacked on “No Explanation,” a closer that acted as ellipses, an open-ended semi-existential question mark that bridged the real and the abstract as Stizz searched for answers.

With golden teeth, a golden heart, and golden bars, Stizz is a star in the making. The 25-year-old had Cleveland in the palm of his hand last night, and things are only looking up for him in the future.