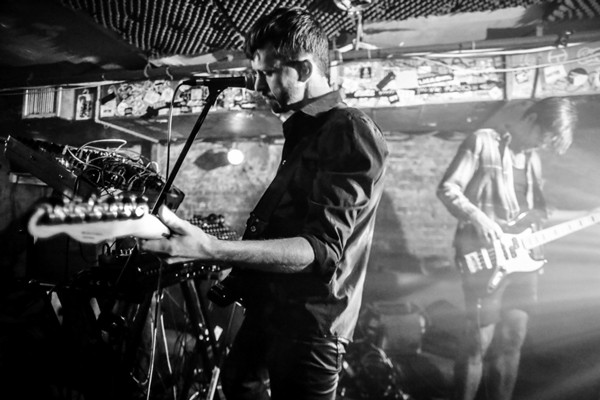 Over the past twentysomething years, Ohio natives Charles Noel and Todd Sines, musicians who first met a Revolting Cocks show in Cleveland in 1990, have recorded for electronic music labels like Ghostly International, Planet E and Peacefrog.

They recently launched their own imprint, HELIC.AL, to issue the debut album from Interval, a band that features both Noel and Sines.

They’ll host a special label showcase at 9 p.m. on Friday at the Phantasy.

“[The album represents] what happens when you take experienced electronic music producers who wear their broken hearts on their sleeves and get them back to their formative roots,” states a press release about the disc.

“We’re stuck in this doorway of a time portal between the future and the past,” explains Sines in an article posted on the band’s website. “We’ve acquired some of the same equipment that was used to make some of our favorite records. I have an old Marshall Time Modulator that used to belong to Roger Waters and was used by Tones on Tail and Bauhaus; we use the same MCI JH618 mixing console Kraftwerk used on Computer World, and the same AMS delays and reverbs that Martin Hannett used on Joy Division’s work. We also use the Korg KR-55 drum machine that was featured on Depeche Mode’s Speak & Spell and countless Cabaret Voltaire tracks."

And yet despite possessing so much vintage gear, the guys say they don't intend to simply repeat the past.

"The music we make ends up being a distorted refraction of the current world,” says Sines.

Tickets to the concert are $8.