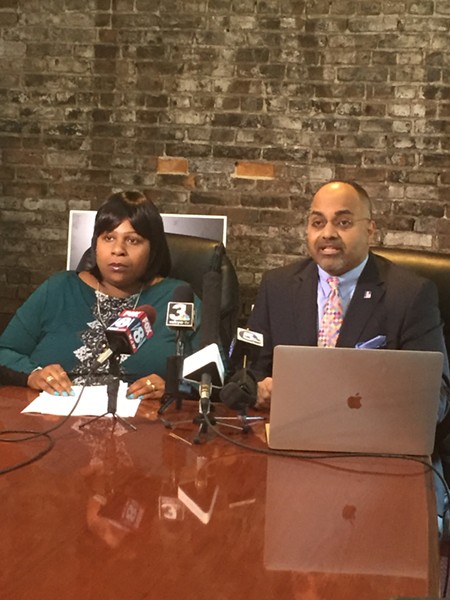 Cleveland attorney Subodh Chandra and Samaria Rice have called upon mayoral candidate Zack Reed to "disavow, repudiate and reject" the endorsement of the Cleveland Police Patrolmen's Association, the police union for rank-and-file officers.

That organization endorsed Reed last week, but Chandra and Rice said that under the leadership of Steve Loomis, the CPPA has become an "extremist, anti-reform, pro-Donald Trump" union.

In a Monday morning press conference, both Chandra and Rice read prepared statements. The intent was to demand action from Reed: that he reject the endorsement, return any financial contributions from the union and apologize to Clevelanders for his "poor judgement and moral bankruptcy."

But the majority of the prepared material directly attacked Loomis himself. It was a storm of hostility that represented both a continuation, and an exaggeration, of the war of words between Chandra and Loomis that was waged throughout the Tamir Rice legal proceedings.

Loomis was "morally depraved," Chandra said. He was "small-minded" and "mean-spirited." He was a "cancerous force" on the Cleveland Community Police Commission. He was "abnormal."  An endorsement from a Loomis-led organization was an endorsement "of lawlessness, a lack of accountability, a corrupt approach to governing, and the white nationalism represented by Donald Trump."

Chandra cited specific comments from Loomis about Tamir Rice and the Consent Decree — he told Trump it was a "waste of time" — and lashed out at the CPPA lawyers who had facilitated the "coddling treatment" of officers Timothy Loehmann and Frank Garmback during the Tamir Rice grand jury proceedings. The officers were permitted to read prepared statements but were not subjected to cross-examination. Chandra said that any competent prosecutor would have rigorously cross-examined the officers, and the fact that Timothy McGinty did not was evidence of a "manifestly corrupt" relationship between the union and politicians. The CPPA had endorsed McGinty in 2012.

Thank you to the brave men and women of the CPPA for your endorsement. I am extremely honored!#safetyfirst#zackreedformayor pic.twitter.com/XkMfmQzwGP

— and asked how Reed, who previously criticized Loomis for the CPPA's Donald Trump presidential endorsement, could now be "extremely honored" to receive this organization's backing. He wondered whether the union "had anything" on Reed.

"With his three DUIs," Chandra said, in a provocative moment, "what will happen the next time he's pulled over by Cleveland Police?"

Chandra clarified that the press conference was not an endorsement of incumbent Mayor Frank Jackson, but rather an attempt to sound an alarm: that any endorsement by the CPPA under its current leadership should be considered "politically toxic."

"Cleveland is better than its police union," Chandra said. "Is Zack Reed?"

Samaria Rice, in prepared remarks, echoed Chandra's comments and said that she was "dismayed and disgusted" that Reed said he was extremely honored.

Rice said the CPPA "acts like white supremacists," and said she was insulted by how they frequently change the "Black Lives Matter" phrase into "All Lives Matter" or "Blue Lives Matter."

She said Reed had offered sympathy over the weekend, but that she wasn't interested.

"Please spare me, Zack Reed," she said. "If you were sympathetic, and were sincere and actually cared about my grief, then you would not have said you were extremely honored."

Reached by phone after the press conference, Zack Reed said that he did not intend to reject the CPPA endorsement, but also said he stood by his previous comments about Steve Loomis.

When asked how he reconciled his opposition to Loomis in the past with his acceptance of the union endorsement now, Reed said there was nothing to reconcile.

"The Union is more than Steve Loomis," Reed said. "They voted 27-0 to endorse me, 27-0. If I'm Mayor, I'm working to enforce the Consent Decree. I'm not trying to undermine anything."

When asked directly if Loomis or the Union "had anything" on him, Reed said no. Nor was the endorsement something he sought. He said that the last he'd heard from Loomis, the Union wouldn't be endorsing either candidate in the race, so the news came as a surprise.

Sunday, on social media, Reed said it was "truly a sad day in politics when the senseless killing of a 12-year-old child is used as political ammunition."