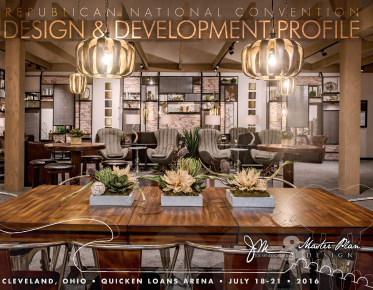 A roster of major corporations slid through the back door and quietly contributed to the 2016 Republican National Convention — at a time when those very companies were facing public pressure to distance themselves from the circus. Comcast Corp., Microsoft, Koch Companies Public Sector, Chevron, AT&T and others offered almost $1 million in sum to the short-lived Friends of the House 2016 LLC, which funded and operated a secret "plush hideaway" for legislators within Quicken Loans Arena during the RNC last year.

The paper trail was uncovered by the Center for Public Integrity and through the court docket of a lawsuit against Nautica Entertainment for tortious interference with the promotion of a Kid Rock show and other "charity" events at Jacobs Pavilion last summer. The LLC's bank records were attached to that suit as a court filing. (The Friends of the House 2016 LLC bank records have since been sealed, though the Center for Public Integrity worked quickly to obtain them prior to that court order.)

According to those records, the primary purpose of Friends of the House LLC was to design and outfit an "exclusive office, lounge and gathering space for Republican lawmakers" that was ultimately located on the practice court at the Q. (The space is referred to as a "cloakroom" in design records.) The legal structure of the LLC hid the sources of its funding, whereas donations to the Cleveland 2016 Host Committee Inc. would have ultimately landed in the records of the Federal Election Commission.

Comcast Corp. paid $200,000 to help arrange the discrete gathering space for lawmakers. (Comcast of course would benefit considerably from a favorable President Trump, who has in the past threatened to break up past Comcast mergers and block future mega-deals.)

Koch Companies Public Sector donated $100,000 to Friends of the House LLC, after the well heeled brothers made a big show of skipping the RNC and refusing to pour any money into it.

AT&T gave $100,000. The Pharmaceutical Research and Manufacturers of America gave $50,000. Quicken Loans gave $50,000. A full list of Friends of the House LLC contributors can be found here.

We spoke with reporter Carrie Levine today about how she mapped the network of court filings and bank records. At the Center for Public Integrity, her beat revolves around the role of money in politics; last year, she and colleague Dave Levinthal reported on the political opportunities presented by "charity" concerts held adjacent to national conventions. With big bucks propping up an exclusive Rick Springfield show, for instance, the access to policymakers and their staffers is direct and private. Much like the atmosphere inside a cloakroom at a political convention.

"In September [2016], when the Republican Host Committee released its report listing donors and contributors and expenditures, I did a story about the report," she says. (See that story here.) It was in that report that Levine first came across "Friends of the House LLC." She mentions the contribution at the end of the article:

Notably, many prominent GOP donors — including the Koch brothers — aren’t on the [host committee's donor] list.

The host committee received roughly $1.5 million from two limited liability companies created within the past year: Convention Services 2016, LLC, of Tennessee and Friends of the House 2016, LLC, of Virginia.

Agents for the two companies could not immediately be reached for comment.


"Anyone who covers money in politics is interested in limited liability companies," Levine says, "because the question is, 'Oh, well, I've never heard of this company. What is it?' Sometimes it's something that's been around for a long time or a business that's familiar to a lot of people, and sometimes it's something new. And then the question is, 'Well, where does this business get the money that is then going into politics?'"

From there, Levine began working on the LLC's origin. That led to the LLC's registrant, political fundraising consultant Jeffrey Livingston. Court records revealed that the LLC was "established to manage and raise funds for hospitality activities and events during the 2016 Republican National Convention.” (Livingston is well connected to House Speaker Paul Ryan and other congressional reps.)

The story lines converged on the court docket of the Nautica Entertainment lawsuit, in which Livingston's Concerts for a Cause charity group was accused of running a scheme with the venue to bilk Blue Star Productions out of $1 million in event revenue. Bank records for Friends of the House LLC were entered into the docket for about a month before a judge ordered them sealed.

In that window of time, Levine secured the documents and drew the connections between the LLC, the corporate contributors and the RNC host committee's revenue report.

For the public, Levine's report is a worthy callback to the RNC. Last spring and summer, as Trump's campaign veered toward the violent and alarming, major corporations were encouraged to back away from the RNC — after years of routinely chipping in to support national political conventions. Voters were met with headlines like this: "Microsoft Will Not Donate Money to Republicans’ Convention." (Microsoft gave $100,000 to Friends of the House LLC.)

“The immediate effect is it looks like it hid certain donors to the convention,” Lawrence Noble told Levine. Noble is senior director and general counsel for the Campaign Legal Center, a nonpartisan nonprofit that advocates for campaign finance reform.