CSU students and community members decried the administration's response to an anti-LGBTQ poster that appeared on campus last week. During the rally and subsequent march to President Ron Berkman's office, students repeatedly insisted that the minority populations at CSU feel less safe than they had just a week ago. They expressed concern that university leadership was looking the other way under what many viewed as a legal guise.

"The law should not be and cannot be our moral compass," event organizer Molly Stachnik said. "Regardless of whether or not this speech is legal, we need to stand up to it."

She was referring to Berkman's rather opaque invocation of Brandenburg v. Ohio, which presents public agencies with a responsibility to protect speech that doesn't directly incite or produce "imminent lawless action." In a public statement on the poster, Berkman had written, "CSU also is committed to upholding the First Amendment, even with regard to controversial issues where opinion is divided."

About 200 people gathered in the main courtyard off of Euclid Avenue to hear Stachnik and another 20 or so students speak. Most of the comments were aimed at Berkman's statements; "When I read the second email, it broke my heart," one student said.

While there was a brief reference to demands for more all-gender restrooms (and a crackdown on vandalism thereof), the general plea among students was for a more nuanced and sensitive conversation around hate speech and what the university can do to ensure students' safety. One student suggested that the university should craft more specific speech policies that go above and beyond state law — much like CSU and other schools regulate possession of weapons in a different way than the state might. 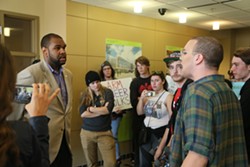 Students also urged their classmates to tune in and join the conversation — even if they themselves haven't felt threatened by the poster.

"It's pretty scary," one transgender woman told the crowd. "A lot of us are scared. I've heard a lot worse than what was on that poster." She pointed out that many people were simply walking by the rally, and said that a lot of students don't have the opportunity to ignore this situation.

A smaller group of students marched to Berkman's office, though he was not available to meet. An office spokesman did, however, promise more formal conversations in the future to augment campus protests — "which we support," he said.

Berkman addressed students during a forum on Wednesday.