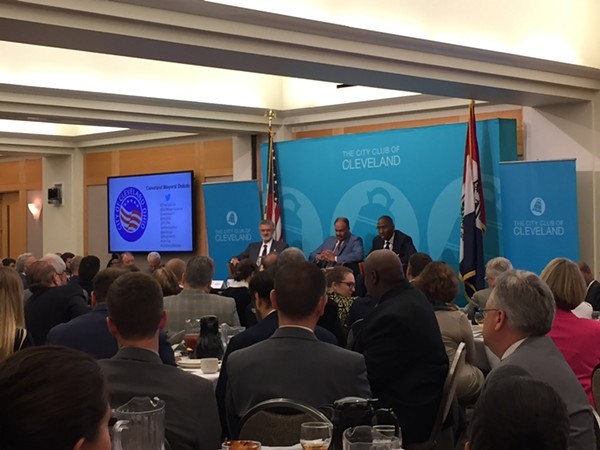 In an alternate universe, one in which Frank Jackson is not the mayor, or at least a different version of himself, there would be a second mayoral candidate event tomorrow night at Tri-C's Jerry Sue Thornton Center.

Coming a week after Jackson and Zack Reed sat for a debate at the City Club of Cleveland, the mayoral town hall would feature each candidate, appearing separately with an intermission, in front of a moderator (Harry Boomer, from Cleveland 19 and the Greater Cleveland Association of Black Journalists), three panelists — Sam Allard from Scene; Russ Mitchell from WKYC; and a representative of the Cleveland Press Club — and a gathering of voters who would also pose questions.

Alas, Frank Jackson is the sitting mayor, and, to borrow some Jackson parlance, he is what he is, because that event was canceled after the mayor demanded that Scene not be involved.

Some background: Along with the Greater Cleveland Association of Black Journalists, Mitchell and the Cleveland Press Club, we've been engaged in talks for a mayoral candidate event the past few months. An initial plan called for a second debate, on October 19th or 25th, hosted by members of the four organizations. Reed confirmed his participation on September 13th, and an invitation and explanation of the format was sent to Jackson's campaign. (It'd be, coincidentally, the exact format used at the City Club debate, and, coincidentally, Russ Mitchell was asked on September 14th to be a panelist at the City Club debate. But we digress.) The mayor declined to participate through his campaign spokesman Joe Mosbrook, who said that Jackson, as part of a new strategy, would only be doing one such event.

Despite our best efforts, it seemed the voting public of Cleveland, in advance of a crucial election, would get only one chance at seeing the two candidates face off in person.

But a week or so later, Harry Boomer ran into Valarie McCall, the city's Chief of Government and International Affairs and Jackson's No. 2. While the mayor didn't want another debate, she told him, he would be open to a town hall style forum with Reed and himself holding court independently. (Basically, Jackson refuses to share a stage with his opponent anymore than he has to.) There was one additional condition: Scene could absolutely not be involved, she said. This was non-negotiable.

It wasn't an ideal proposition — we'd want the chance to be involved and question each candidate, but we wouldn't want to be the reason the public lost a chance to vet the candidates themselves — but Boomer told McCall he'd take it back to the GCABJ at their next meeting. That happened the next day, during which there "wasn't even a question" of acceding to Jackson's demands that Scene be excised from the proceedings.

An invitation to the event, scheduled for 6 to 9 p.m. Wednesday, October 25, at the Jerry Sue Thornton Center, was sent to Jackson's campaign with a deadline of last Monday to accept or decline. Reed, of course, had already accepted. And, should Jackson demure once again, a Plan B featuring Reed and assorted candidates from some of the city's tightest council races was planned. All of that was to be discussed at a meeting last Saturday.

By Tuesday of last week, Jackson's stipulation still stood and Plan B was being finalized. But on Thursday, the evening after the City Club debate, Scene was informed by Harry Boomer that Jackson was in and we were out. Mitchell told Scene he would no longer be involved based on the developments. The Press Club followed suit.

In the end, the entire event was canceled, though we can't say for sure how much the departure of the various parties involved played into that. (See quotes from those parties below.) Regardless, we're disappointed not just in Jackson's decision to deprive the voters of the forum, but also his willingness to single out Scene, or any media outlet for that matter, based on what he must view as critical coverage of his administration. That's behavior we may have come to expect from the President, but not from our local leaders.

"You don't let a source dictate who can ask questions and who can't," Russ Mitchell told Scene last night regarding his decision. "If that's the price of admission, you have to say thanks but no thanks."

Thomas Fladung, on behalf of the Cleveland Press Club, concurred: "We were disappointed that we couldn't work with the Greater Cleveland Association of Black Journalists and Scene to organize a mayoral forum and give Cleveland's voters another opportunity to see their two candidates for mayor answer questions and address issues.

"Ultimately, though, it came down to this: The subjects of news coverage don't get final say on who they'd like best to ask the questions and do the reporting - or who they don't want. And I think that particularly applies to public officials participating in an event organized by the journalism organizations. When Mayor Jackson's office decided that had to be part of the deal, the Press Club board decided we didn't want to be part of any such deal.

"It wasn't an easy choice. We'd prefer voters get to see and measure their candidates. But we decided it was the only choice."

Boomer, for his part, and on behalf of the Greater Cleveland Association of Black Journalists, told Scene the arrangement itself, in the end, was what led to the event's demise.

"Politics and politicians often deal in the art of compromise. In journalism, compromise is a luxury we can not afford. We at GCABJ very much wanted to offer the residents of Cleveland an opportunity to see and hear from those wanting to lead this city," Boomer wrote. "We also wanted those people to have access to same. However, after much discussion and soul searching we felt the mayor's requirement that we should drop Scene Magazine from the panel of journalists to ask questions was crossing a line that as professionals we should not and will not cross. Keep in mind, it is our standard to which we must be held, not that of those seeking office. We look forward to fairly covering this race and without bias cover whichever administration wins, but we will do as we always have with our good judgement and ethical standards intact. Thank you for your interest and I believe our faith in your fairness will support our decision to do the right thing at the right time."

A message seeking comment from Jackson's campaign was not returned.

A message seeking comment from City Hall spokesperson Dan Williams, who as recently as two weeks ago told a contributor of ours that the city doesn't talk to Scene "because it's not a responsible media organization and treats the mayor and city unfairly," wasn't returned either. Williams did, however, reach out to the contributor shortly after our email to inquire how and why the remark made its way to Scene HQ and to note he'd probably let our request lie dormant (per usual). He then asked that the writer not let us know what they'd discussed.