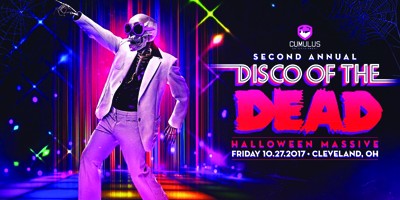 Each Halloween, jam bands across this fine nation put a twist on their shows. Here in Cleveland, the Werks will host their second annual Disco of the Dead. It's a night of funk-fueled groove rock with Mark Farina, Gibbz, Wanyama and others in tow. Bring your dancing shoes and wear the weirdest costume you can imagine. (Eric Sandy), 9:30 p.m., $20. The Agora Theatre.

As far-fetched as it might seem, the Gabriel Alegria Afro-Peruvian Sextet that performs at the Bop Stop tonight has ties to Ohio. Band leader Gabriel Alegria was born in Lima in 1970. His father, the playwright Alonso Alegria, was a visiting professor at Kenyon College, and while Gabriel Alegria was there in the mid-'80s, he attended high school in the area. Alegria then studied at the National Conservatory in Lima and at Kenyon College. He earned his Master's in jazz studies at City College in New York and completed his doctorate in jazz studies at the University of Southern California. Twelve years ago, while at USC, he formed his sextet. Tonight's Bop Stop performance will celebrate the release of the band’s sixth CD, Diablo en Brooklyn. (Niesel) 8 p.m. Bop Stop.

Shortly after forming in Greece, the hard rock act Barb Wire Dolls received a little help from the influential L.A.-based DJ Rodney Bingenheimer, who played the band's music on his radio program and built a stateside buzz for the indie act that had only self-released its albums at that point. Thanks to some very supportive fans, the band self-funded its first few releases and even managed to record its debut album, 2012’s Slit, in Chicago with engineer extraordinaire Steve Albini (PJ Harvey, Bush). When it came time to record their latest album, Rub My Mind, band members decided to work with Jay Baumgardner, the guy who produced their previous effort, 2016’s Desperate. It’s their best effort to date. The Green Day-inspired “If I Fall” features a rolling bass riff and hiccupping vocals while “Desert Song,” a track that includes a mix of acoustic and electric guitars, comes off as a classic power ballad. Significantly, the current U.S. tour features support from Russia's controversial rock band Svetlanas and South Korea's 57. (Niesel) 9 p.m., $8. Musica.

When the local metal act Mushroomhead first formed in 1993, few critics imagined the group would still be going at it in 2017. And yet the masked band is now more popular than ever. Their most recent album, 2014's The Righteous & the Butterfly, embraces a wide range of musical styles, including hip-hop, electronica and hard rock. Recorded at the band's studio in North Royalton and mixed by long-time collaborator Bill Korecky, the disc is arguably the band's most polished effort to date. Expect to see an elaborate set and crazy costumes at tonight's annual Halloween bash. (Niesel), 6 p.m., $29.99 ADV, $35 DOS. The Agora Theatre.

Singer-songwriter Tori Amos’s 15th album, Native Invader, an “intense feast of melody, protest, tenderness and pain,” as it’s put in a press release describing it, stems from a road trip she took through the Smoky Mountains. She wanted to reconnect with her mother’s family, who were from the area. Shortly after taking that trip, Amos’s mother Mary suffered a debilitating stroke and lost the ability to speak or communicate in any fashion. And then, the election happened. All these things inform the tunes that Amos and her husband, multi-instrumentalist Mark Hawley, recorded at Hawley's Cornwall, England studio. Though the album features string arrangements and dense layers of synthesizers and electronic instrumentation, Amos says she and Hawley played most of the instruments themselves. With distorted bluesy guitars and a bit of old school organ, “Broken Arrow” possesses a great roots rock feel. It’s one of many highlights on another solid effort. (Niesel) 7:30 p.m., $45-$70. State Theatre.

A little more than 20 years ago, breathy singer-songwriter Shawn Colvin released an album about heartbreak, bravery and divorce. "Sunny Came Home," the biggest and sunniest hit off A Few Small Repairs, not only got in everyone's head that summer, but it also garnered the artist a pair of Grammys. And while Colvin is celebrating her seminal record with an anniversary tour, including a stop on the Kent Stage this weekend, don't expect her to sound exactly like the album. Her vocals are more grounded and mature, her vibrato a little wider. But that's what you should expect from a musician who's been at this for more than 30 years. (Laura Morrison), 7:30 p.m., $40-$125. The Kent Stage.

NRBQ may exist outside of time and space. Fans already know that the band’s stunning catalog sounds like a collection of Top 40 singles from another universe, flourishing outside of mainstream recognition and traditional success. But what they may not know is that even with the major changes in member alignment in recent years, the band is as tight and passionate as it has ever been. The current tour supports the band's new EP, Happy Talk. (Emily Votaw), 8 p.m., $20. Beachland Ballroom.