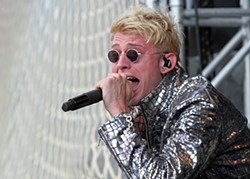 At this year’s Lollapalooza, local rapper Machine Gun Kelly put on a rousing performance in front of an enthusiastic audience of teens and twentysomethings, delivering one of the most aggressive sets of the entire festival.

“Middle fingers up,” he shouted at the start of a rowdy set that included a tribute to Linkin Park singer Chester Bennington, a friend of his who committed suicide earlier this year. MGK paid tribute to Bennington with a rendition of the Linkin Park tune “Number,” adding that the gray skies provided the right atmosphere for him to sing the track. It was a memorable performance.

Now, MGK has just announced that his Double XXMAS Show will come to Wolstein Center at 7 p.m. on Friday, Dec. 22.

The folks at Wolstein Center boast that it’s the rapper’s first “headline arena show” in his career.