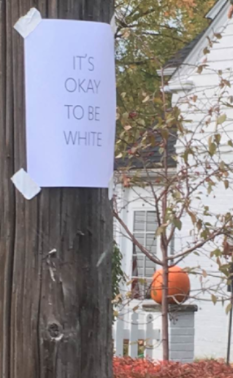 Residents in Rocky River are sharing thoughts via social media today on a smattering of signs posted around town reading: "It's OK to be white." The signs appeared throughout the north side of town ("Tangletown") yesterday evening, as trick-or-treating loomed on All Hallows' Eve.

As these things go, a number of very similar signs appeared in and around Cambridge, Mass., this morning too. Big surprise!

We dug around the stupid internet and found that this all leads back to a 4chan thread. (4chan is an anonymous forum from which you can draw your own conclusions vis a vis content and tone.) If you don't want to click that link and run into various NSFW comments and rhetoric, here's the "plan" that was propagated:

GAME PLAN (IF YOU HAVEN'T SEEN IT ALREADY):

2. put on silly halloween costume for anonymity, nobody will think twice because it's halloween

3. posters go up on campuses (and elsewhere) across the world on halloween night

4. the next morning, the media goes completely berserk

5. normies tune in to see what's going on, see the posters saying "it's okay to be white" and the media & leftists frothing at the mouth

6. normies realize that leftists & journalists hate white people, so they turn on them

7. credibility of far left campuses and media gets nuked, massive victory for the right in the culture war, many more /ourguys/ spawned overnight

PROOF OF CONCEPT:
A harmless message like this has already caused a massive media shitstorm before:
https://www.youtube.com/watch?v=mfu8UkvpKYc [Embed] [Open] [Embed]


Sure enough, that link in Step No. 1 leads to an image that matches the posters appearing in Rocky River.

I guess we're a part of the scary media reaction now, but we figure it's best to just expose tripe for what it is every now and then.