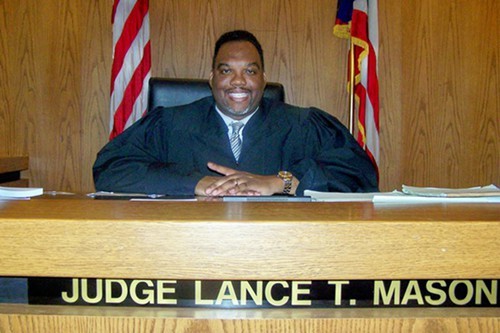 Mayor Frank Jackson has hired former Cuyahoga County Court of Common Pleas Judge Lance Mason as an administrator for minority businesses at City Hall. WKYC broke the story that Mason, who served nine months in prison for violently assaulting his wife in 2014, was personally hired by Jackson from a pool of 13 candidates.

In the WKYC video, the city's media relations director, Dan Williams, refuses to provide comment for the story and won't allow WKYC to interview either Jackson or Mason himself. Mason was hired in late August.

While investigator Tom Meyer draws a potential connection to Congresswoman Marcia Fudge — did Fudge, who knows Mason, ask a favor after she endorsed Jackson in August? — the hiring of former criminals is very much in keeping with Jackson's M.O. He has a habit of bringing disgraced public officials back to City Hall.

"Jackson's decision shouldn't surprise anyone," Cleveland.com's Mark Naymik wrote in 2014, when Jackson hired former City Councilwoman Sabra Pierce Scott at City Hall, despite her involvement in the Cuyahoga County corruption scandal. "He flaunts a critics-be-dammed management style and has a penchant for excessive loyalty to allies and staff, especially those under fire for poor management in the water and police departments."

In another instance, Jackson okayed the hiring of former Councilman Eugene Miller. (Miller is currently seeking election in Ward 10 and will face Anthony Hairston in the general election.) Miller was vanquished by Jeff Johnson in 2013 and lost his council seat. He was the frequent subject of controversy as a councilman, but was nevertheless a loyal servant of Council President Martin Sweeney, and nabbed a low-level job in the Public Works department for his loyalty.

As Naymik pointed out, perhaps the most egregious examples of Jackson's misplaced loyalty are in the police department. He elevated former police chief Michael McGrath and former safety director Martin Flask after they presided over a department that had run roughshod over citizens' constitutional rights for years — #137shots, Tanisha Anderson, Tamir Rice. The guys in charge didn't get fired. They got promoted.

This loyalty to "weak links" was one of two key issues that the Plain Dealer / Cleveland.com raised in their endorsement of Jackson over the weekend. The editorial board said their endorsement came with caveats:

"One change Jackson needs to make is to bring new perspectives into his administration, including younger leaders, both to provide fresh ideas and also to make sure he's setting the stage for the future, and the leadership Cleveland needs for the next decade," the editorial read. "With these caveats [the first related to public records and transparency], we think Jackson can change where he needs to change, and that he can continue to lead this city forward with resolution and fairness."

But the recent hiring of Lance Mason, a violent domestic abuser, is not a step in the right direction.