Update: Portugal. The Man Concert Moves From the Agora to Music Hall 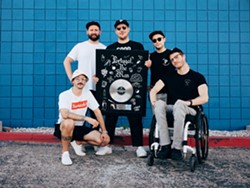 Update: Because the Agora Theatre is currently undergoing an extensive renovation that will be completed in multiple phases throughout 2018, several upcoming shows have shifted to other venues.

All previously purchased tickets will be valid at Music Hall.

Additional tickets will be released and will go on sale today at AgoraCleveland.com. If any tickets remain, they'll be on sale at the Music Hall box office on the day of show.

Original Post 11/1/2017: Although Portugal. The Man was originally formed as a side project for lead vocalist and guitarist John Baldwin Gourley, the band has risen to prominence in the experimental rock scene.

The band has built a reputation as “one of the most exciting and sought-after live bands on the touring and festival circuit” and has sold out venues around the world and held main stage slots at festivals like Bonnaroo, Coachella, Lollapalooza, and many more.

Today, the group announced plans for a 2018 headline tour. The jaunt includes a stop at the Agora on Feb. 18.

A special fan presale through P.TM's website and a special Spotify presale are currently underway.