Aqueous Returns to Cleveland This Week, Building on an Unbelievable Year of Groove Rock Glory

Back in March, Aqueous played a show at Beachland Ballroom. They'd done this before — playing at Beachland, playing here in Cleveland — but this show was markedly different. The air was charged in a more vivid, more complete way. Something had gotten into these guys. 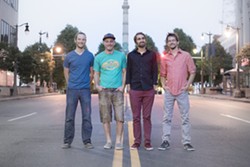 "I can remember the last Cleveland show we played – I think it was March of 2017. It was one of the earlier shows where we really started exploring more," guitarist Mike Gantzer tells Scene. "I think we did a six-song, two-hour set or something like that. That all of a sudden became a norm or a comfort zone for us – to explore in new and interesting ways. I think it's just been a really natural progression for 2017 to be a year where we got in front of a lot of new fans, and we were really settling into a sound and settling into a feel as musicians and as a unit that we're proud of."

Take the sprawling 20-minute "Complex Pt. II" from the Cleveland show. Before even five minutes are up, the band is mapping a swampy textural plane onstage. Gantzer's guitar is blinking against the psychic haze of Dave Loss' keys and drummer Rob Houk's Jurassic rhythms and beats. And then — then! — bassist Evan McPhaden quietly starts kicking around a dose of dance floor vibes in a simple and effective pattern, a motif that you can hear throughout the duration. The band syncs completely, and by the eighth minute we're all jetting into the cosmos on Aqueous' intent. (Listen to that full show below.)

The "Complex Pt. II" jam is indicative of a broader tendency toward more involved, more exploratory jamming all year. It's been overshadowed, depending on whom you ask, dozens of times over as the 2017 touring schedule has played out. For those who were at the Cleveland show, though, it remains a titan.

The Buffalo-based band has been active since their high school days in the late 2000s, with earnest touring beginning in 2010-2011. Early on, they adopted the "groove rock" descriptor, and it still works as a succinct explanation of their sounds. Pure groove rock.

These days, the road has taken them into the southern states and points further west, like Colorado, where bourgeoning fanbases are catching on to what many in the jam scene have been shouting all along: "Aqueous is f***ing Awesome."


2017, though, is the Year of Aqueous. After a search for a new drummer brought Houk onboard in early 2016, the band has gelled in a way that even they may not have anticipated.

"[Last year] was still a transition year for us," Gantzer says. "We found [Houk] around March and made it official around April. You kind of get to know someone musically. I will say that we have this really strange, inherent, beautiful connection with Rob already; even when he auditioned, it was this sort of really strange synchronicity where we were connecting musically even though we didn't know each other at all. To me, that's the beauty of music — but those are rare people to find."

To anyone who's been watching this band develop, Houk's addition really did up the Aqueous ante on a consistent basis. He's lent his voice to a few cover tunes ("Alive," for instance), and his rhythmic lock-step with McPhaden has further emboldened the character of the band. His presence is a puzzle piece to the story of Aqueous that the other guys are glad to have found, and the move pays off nightly for fans.

"Me and Evan and Dave have been friends since we were like 12, you know?" Gantzer says. "I think to integrate somebody new on both ends is a big shift and can be a big change for both parties. I think everything just kind of clicked [in 2017], between our friendship with Rob and our closeness and him becoming a family member, and then just the amount of shows we were getting under our belt. We started feeling more confident to take more chances and explore more.

"We spent a lot of time in 2014, 2015 in that transition period with some tough family stuff going on behind the scenes and trying to keep it all together as we were going through this drummer switch," Gantzer continues. "Now, we're finally able to feel confident and express ourselves in a way that we feel really good about musically and personally. 2017 to me sounds like us finding a comfort zone and a happiness and a freedom to really dive into improvisation and try to put on as powerful a show as we can."

As another major upside to this year's growth, the band signed on with nugs.net, which gives them a platform to share high-quality audio directly with subscribing fans. It's been a boon to the community, which mirrors the fanbases of Phish and Umphrey's McGee and others in a passionate drive to collect live recordings of tours, to follow the story as it's being told.

Sound engineer Ryan Bress has done an incredible job of mixing these shows and getting them in fans' hands with a quick turnaround. Right now, for example, you can stream the 11/3/17 show in Covington, Ky., which features a 25-minute encore in "Triangle," a classic from the band's 2011 album Giant Something.

One fan wrote: "No words to describe quality of encore. This is beginning of a new level."

The next night? Morgantown, W.V., saw seven songs stretched across two sets, which included "War Pigs" and the throwback "Dave's Song" from 2009. The encore that night ended with Ween's "Bananas and Blow." Audio is forthcoming, and the base obviously awaits the goods with anticipatory chatter on the Facebook fan page.

There's always been a hearty following among the Aqueous community, but everything is bigger this year. Fans will tell you, and anyone who shows up at the Beachland show this week will see it firsthand.

On top of the nugs.net collection in general, Aqueous has released two live compendiums this year, which make for mandatory listening for anyone interested in jumping on the rest of this tour. Element Pt. II came out just about two weeks ago, and it features a nice variety of heavy-hitting funk and deep disco freakout jams from 2017 — plus a rare acoustic rendition of "Marty" from the band's Night Lights Music Festival appearance.

Assembling those releases — which serve as an evolution from the old LiveNugs CDs — ends up being a fun process for a reflective and introspective band like Aqueous. "Some of the versions, we'll kind of walk of stage some nights and we'll know, 'Hey, this version was really cool.' And I might write it down,” Gantzer says. “Also we rely on our fans' perspectives on what shows or songs or versions they really like. I've even gone so far as to communicate directly with a few different fans that are really passionate. And you get different fans too; sometimes I'll talk to someone that's been following our band for the past five or eight years, and then I'll talk to someone who's been around for the past two or one or whatever. I've found that there were some consistencies in versions of songs that people were continually referencing as their favorites.”

The version of "Uncle Phil's Parachute" from Element Pt. II, for instance, has been talked about all year among fans ever since it happened back in February. It's addition to the Element released was indeed widely praised.

All of that — Houk's arrival, the deeper and more exploratory jamming, the nugs.net factor, the Element releases, the fan interaction — all of that promises a tremendous future for this band. The feeling at Beachland Ballroom back in March was something different, because Aqueous is jumping off a very clear transition (marked neatly by last year's EP release) and into the next chapter.

For the immediate future, next up is Cleveland, and then the rest of fall tour — and then the New Year's Eve run, which includes a supporting role at Umphrey's McGee's 12/29 show in Denver and a headlining show at the Town Ballroom in Buffalo on Dec. 31.

"Playing the Town Ballroom in Buffalo is a big deal for us,” Gantzer says. “As we grew up as musicians in the city, from the time we were 12 or 13 and playing music, that was the venue we'd see shows at. It's very meaningful.

"When you see a show as a kid, you always – at least as a musician – you picture yourself up there. You hope that someday you can do something like that. For us, the Ballroom was a sacred place. I saw so many crucial shows there – moe., Umphrey's, even just a few days ago I caught the Wood Brothers there. We have some really cool plans that we're about to reveal about what we're going to do for the evening with some cool themes and some wild stuff."

Beyond New Year's, look out for a new album release date announcement in early 2018. The band's got big plans there, as well, finishing off a year of gradual studio time.

"We took it a little bit differently this time, where we basically started tracking things in January of 2017 and have slowly, in between all the tour days, gone back to the studio, chipping away and writing these songs and going in right away," Gantzer says. "It's been a totally different approach from our previous albums, and I'd say like 80 or 90 percent of the material that's on there has never been heard by anybody.

"Normally we would play the songs live and debut them and work them out in that setting. We wanted to try and see what we could do with actually writing the songs – just as the songs themselves for the studio and try to make the best compositions we possibly could and have them be fresh and interesting. We've definitely channeled some interesting things. [New single] 'Weight of the Word,' for example — in terms of like a production idea — we had Steely Dan in the back of our minds. It's been interesting to experiment with some of these different sounds that are still, at least in my mind, very uniquely Aqueous, but maybe a step forward or a step in a direction for us."