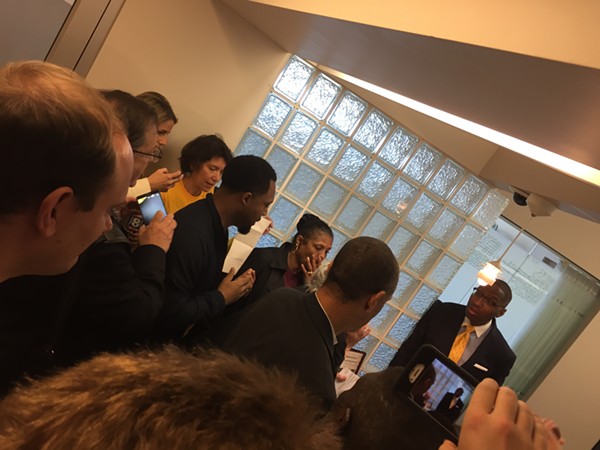 A seemingly benign piece of legislation was subject to scrutiny at a City Council Finance Committee hearing Monday afternoon, spawning a long and heated discussion about transparency and campaign finance. The ordinance in question, 854-17, would require financial disclosures within five days of the filing of initiative petitions. It was met with skepticism by several councilpeople who questioned its purpose and efficacy.

“I wonder if this isn’t a solution in search of a problem,” said Ward 10 Councilman Jeff Johnson, who raised the loudest objections.

The ordinance echoes — in fact is literally copy and pasted from — the Ohio Revised Code. The law had not already been in place locally because Cleveland is a city with its own charter and its own processes for initiative petitions.

But after high-profile voter-led referendums over the past two years — the $15 minimum wage issue, the Frank Jackson recall, the Q Deal — Council President Kevin Kelley said this ordinance was an important service for the public, to educate them about how these campaigns are funded.

“This is a small ray of light, a small amount of transparency that we can provide,” Kelley said. And later, “it’s just kind of a good practice to have this on the books.”

Kelley was, of course, Public Enemy Number One on the minimum wage and Q Deal issues, and remains a sworn blood rival of the Service Employees International Union. Still, Kelley stressed that the ordinance would in no way suppress voters' right to referendum; it would only require financial transparency.

"The only thing we're asking is that they submit a financial statement," he said. "We're not restricting anybody's rights. We're not imposing any onerous burdens. All we want to know is where the money's coming from."

In many respects, the legislation is uncontroversial. Typically vocal councilmen Mike Polensek and Zack Reed both agreed that more transparency was something to be pursued. Councilwoman Dona Brady was rightly curious about the requisite paperwork. Polensek said he has dutifully filed his campaign finance and ethics reports since he’s been in office and “has a real problem with” people who don’t. But he advised that if council were serious about transparency, the body ought to take a look at the “bigger picture.”

“For the first time, in this last election cycle, we saw Dark Money influence campaigns,” Polensek said. “And I say this to my colleagues. Brothers and sisters: That money can be used against you next time …. We’ve got to protect the institution from people with thick checkbooks determining who serves on City Council."

Council will likely vote on the legislation as an emergency ordinance Monday evening.