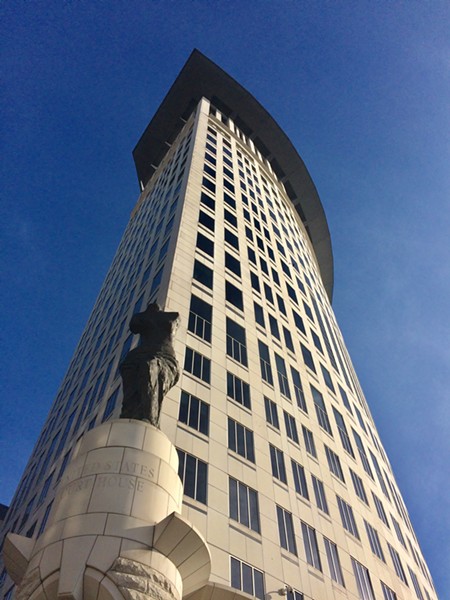 At the behest of U.S. District Judge Solomon Oliver, the U.S. Department of Justice consent decree parties gathered on Tuesday to discuss the most glaring source of frustration in the 2015 agreement: the investigation of civilian complaints against Cleveland police. Hundreds of open complaints remain untouched, dating back to 2014 in some cases. Even with the addition of six temporary investigators at the Office of Professional Standards, which is tasked with processing those complaints, the backlog grows almost daily.

On Aug. 30, by way of illustration, the office had 401 open complaints from the past several years. As of this week, it had chiseled that backlog down to only 383. Matthew Barge, the consent decree monitor, said that the pace was "not even close" to where the office should be right now.

"The problem with OPS [is] it's not any better than it was two years ago when this process started, and it's not getting better," he said. "[This] systemic failure of the city of Cleveland has perpetuated over time, stemming back from the creation of the office in the 1980s."

Records from 2016 show that most of these complaints involve "lack of service" or "unprofessional behavior."

One complaint about an improper tow was received Feb. 3, 2016. It wasn't cleared until Feb. 15, 2017, at which time the complaint was "sustained in part" by investigator Anitra Merritt. And that's one of the rare closed cases in the hundreds of complaints on the OPS desk.

Leaving complaints uninvestigated or even partially investigated — and thus hanging over individual officers' heads — creates a sense of public rot. The word "fester" was used multiple times during the hearing, like when Barge said: "This has been festering for a long time. ... Officers and civilians deserve [a solution]."

The city has maintained that it's plagued by a lack of resources and by a sudden mandate to conform to new policies and best practices — that the matter of training is taking considerable amounts of time and keeping investigators from the actual work of investigating. But the federal oversight team wasn't having it; instead, Barge pointed out again and again that the city simply hasn't stepped up its game.

He referred to a November 2015 meeting with Damon Scott, who until recently led the OPS. During that conversation, at the outset of the consent decree, Barge and Scott discussed a computerized database that could be used to track and catalog complaints. Barge said the conversation was "in-depth." But as of today, OPS is still not using that system (which is the same system used by the police department's internal affairs unit, Barge pointed out).

"That's not a resource issue," he said. "That's a will issue. We need will and drive and urgency. ... This is not about resources. This is about leadership."

The city's law director, Barbara Langhenry, said that they will look to hire a senior investigator via a national search. The city is also hoping to find a permanent replacement for Scott; that job posting went up last week.

"It is our hope that there will not be a backlog this large going into the future," Langhenry said.

This week's hearing had a back-to-the-drawing-board feel to it. Despite Oliver praising certain segments of the consent decree, he insisted that this problem has grown dire.

"If we can't make more progress than this, frankly I'd be looking for a different kind of hearing — one where we'd more adversarial," Oliver said. "And I don't mean that in a bad way — [but] one where we can be more formal." He hinted at the potential need for testimony from Public Safety Director Michael McGrath, who was present today.

"I look to the city to take the lead in coming up with standards and resolution of this issue," Oliver said. "This has to be one of the highest priorities in the area of the consent decree. This is one that we cannot let fester."

The hearing wrapped up with a plan to meet again in mid-December with a more concrete plan of action.