Do You Accept the Nuclear Noodle Challenge Like These Cleveland Chefs?

If you follow certain local chefs and restaurants on Instagram, you likely saw pics of various folks hunched over bowls of ramen. But unlike the typically pale noodles, the ones captured in these snaps are fire engine-red, an unmistakable indication of their spiciness. These masochistic people have accepted a dare: the 2X Spicy Chicken Ramen – or Nuclear Noodle – challenge.

Billed as the spiciest instant noodles available on the market, Samyang Nuclear Edition 2X Spicy Chicken Ramen is twice as spicy as that brand’s original “fire noodle,” which itself was hot as balls. Nearly a quarter million YouTube videos show brave souls accepting the challenge, with many withering in embarrassing defeat. Clocking in at 8,706 on the Scoville scale, the heat ranks well above a typical jalapeno pepper and far below that of a habanero, but I can tell you from personal experience that it eats much hotter than that.

One local challenge circuit was initiated by Matthew Spinner, executive chef of Ushabu in Tremont. While shopping for specialty ingredients at the Asia Foods grocery in the Asian Town Center (3820 Superior Ave.), that shiny red package taunted him from the shelves. He and his crew ate them on a whim, he says, but it was only after seeing the videos online that he decided to share the pain.

“While browsing the Internet one day, I noticed a popular Korean YouTube trend called the ‘nuclear noodle challenge’ and decided to do our own – like an ALS ice bucket challenge to our friends at other restaurants,” Spinner says. “Our staff ate one pack of noodles with two packs of sauce each. It was hot, very, very hot. These are, after all, the spiciest instant noodles in the world.”

What makes these noodles unique – and terrifyingly spicy – is a special packet of blisteringly hot paste that gets stirred into the cooked noodles. It’s a lip-scalding venom of pretty epic proportions, even for hot pepper-heads. In fact, there are just as many sites devoted to the regrettable consequences of eating the noodles as there are favorable.

When it came time to pass the torch, Spinner obviously sought out the most vulnerable of victims.

“We sent it along to our best restaurant friends over at the Plum,” he notes. “It was natural transference, since chef Brett [Sawyer] notoriously dislikes spicy foods.” 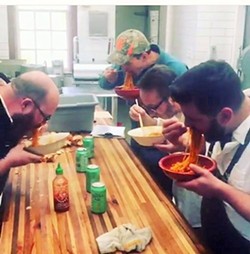 “I felt pretty honored that Ushabu thought of us,” reports Plum owner Jonah Oryszak. “We love what they are doing over there.”

Oryszak said that he and his crew had never heard of the product or the challenge, but they were up to the task, despite the pre-game smack being tossed their way.

“Spinner had done a pretty good job scaring us – telling us how bad it was and how painful it is the next day,” he recalls. “It was really bad. The oil coats your mouth in fire – that’s what’s hard to shake. My involuntary hiccups had everyone laughing so it was pretty hard to eat. In our video you can hear Brett asking me if I swallowed a squeaky toy. Everyone laughing definitely made it way harder.”

As for who would be on the receiving end of the next round, Oryszak said that the guys at Ohio City Provisions immediately came to mind.

Indeed, the macho butchers at OCP can be seen in their Instagram video pausing from the deed only long enough to add hot sauce to their bowls, which they hungrily devoured to the very last drop.

“We love to eat spicy things at OCP,” reports owner Adam Lambert. “We have a lot of fermenting Scorpion and Carolina Reaper peppers and a few large batches of hot sauce that we will be releasing soon for sale here. The noodles are pretty spicy, but seeing that part of the challenge is to eat them as fast as you can, it can get fairly intense, especially when you cover the already spicy noodles in Sriracha!”

Even before the last noodle had been slurped, Lambert can be heard on the video challenging the kitchen at Black Pig.

“We wanted to bless them with this painful spicy gift!”

As for the guys at the Pig, they’ve happily accepted the challenge and plan to share their experience very soon.