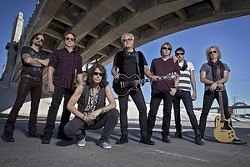 Now, the band has announced an extensive summer tour that will hit even bigger venues in 2018.

The band performs with Whitesnake and Jason’s Bonham’s Led Zeppelin Experience on July 10 at Blossom.

“I’m excited to join forces with my fellow U.K. countrymen, [Whitesnake's] David Coverdale and Jason Bonham, for what’s sure to be a rockin’ summer tour in the States,” says Foreigner founding member and lead guitarist Mick Jones in a press release announcing the dates.

Throughout the tour, Foreigner will team up with local school choirs that'll join the band on stage in almost every market. The program raises money for music in school programs.

Tickets go on sale at 10 a.m. on Friday. Tickets for Foreigner VIP packages that include "meet and greets" with the band will be available at ForeignerVIP.com.