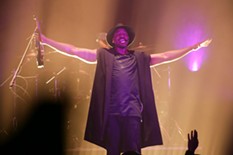 Damien Escobar is a violinist from New York City and was previously in a group with his older brother Tourie called Nuttin' But Stringz. Starting out as street performers, the duo soon found themselves winning talent contests at the Apollo Theater, appearing in movies (2006's Step Up), on television shows (NBC's America's Got Talent) and even performing at President Obama's inauguration in 2009.

The duo separated in 2012, and Escobar spent a short period of time as a real estate broker before returning to music as a solo artist. Escobar's musical style has been described by some as a mix of classical, jazz, pop, R&B, and hip hop.

While Escobar's Heart and Soul tour made its way to the House of Blues last night on a chilly Tuesday evening in Cleveland, the atmosphere was anything but frigid inside. The crowd was a mixture of parents and children, couples and classical music enthusiasts alike. After an opening performance from Pittsburgh's Lyndsey Smith & Soul Distribution, Escobar was set to take to the stage.

You can see photos from the concert here.

The band played a longer intro of Escobar's "Phoenix" to get the crowd excited. They jumped to the roof when Escobar emerged from stage left with his violin in hand, darting from side-to-side. After a couple songs, Escobar proposed a toast to good health, being welcome in Cleveland and lastly for the people who came out to see him on a weeknight.

"I grew up in a house with soul music," Escobar said. He then proceeded to cover songs by the likes of Stevie Wonder, Luther Vandross, Michael Jackson, Prince and Chaka Khan among others.

"We get caught up in our minds," Escobar said. "Get out of your head and into your hearts and we can do the unthinkable," he insisted before playing his take on Alicia Keys' hit song, "Unthinkable" during which Escobar sat on a stool and played his violin by hand plucking the notes one by one. Following the original song "Love Notes," the band played SWV's "Rain" while Escobar handed out roses to the audience before coming off stage and playing as he walked through the venue — eventually making his way to the upper balcony.

After returning to the stage, Escobar told the story of a friend who he had reunited with after 15 years or so who was killed shortly thereafter. He said that after a short period of depression he had to take a look at himself in the mirror to figure out what's important to him as he encouraged the crowd to live their best lives possible, which lead into "Awaken" — his friend's favorite song.

As the show began to come to a close, Escobar asked for all the house lights to come down and cell phone lights to come up as he prepared to perform a song by one of the "greatest musicians to ever live." The tune turned out to be Prince's "Purple Rain." Escobar would come back out to the stage for an encore before departing for good.

There are other violinists who are similar to Escobar, including Black Violin and even Cleveland's own Humble G da Fiddla, but with the energy and showmanship that Escobar brings to his performance, he stands in a class all by himself.