Cleveland Couple Behind 'Ice or Rice' Makes the How, and Why, of Asian Cooking Easier

During this summer's Night Market Cleveland events, the line for the Ice or Rice booth was often the longest. The stand, manned by husband and wife Andy and Jessie Ng, served treats like Japanese cabbage pancakes, Malaysian peanut coconut chicken, rice balls, bubble tea and soufflé cheesecake. For those dishes, attendees didn't mind a 15 or 20 minute wait, partly because Night Market was the only place to score Ice or Rice's food.

It isn't a traditional restaurant, or even food truck. While Andy and Jessie are a fixture at the summertime festivals, their foodie foray is mainly based online — at the couple's YouTube channel and website — where they dish up how-tos on Asian dishes like ramen and Japanese bread, breaking recipes down into simple steps showing viewers not only how but why.

On a recent Sunday morning, in their eastside Cleveland home kitchen, Andy is whipping up a Hawaiian poke rice bowl with fresh, high-quality tuna and whole bean soy sauce. This is where they film the videos and concoct their own recipes.

"We try to make food that a typical Asian household would eat," Andy says of the Ice or Rice concept. "Whenever we travel, we like to try what is local, find those small hole-in-the-wall shops. We try to find the most authentic dishes. A lot of the things around Cleveland are very much geared toward the audience. For a long time you couldn't find ramen."

Jessie, who makes most of the Chinese and Japanese dishes, says she likes to make videos for recipes that are harder to find in America. So not General Tso's chicken.

"Most of the time, it's stuff I love to eat first," she says. "I try to find a sweet spot between what people would like to make at home, but that I'm interested in too."

Andy, who grew up helping his parents in various Cleveland restaurants, started cooking for his co-workers a few years ago making Asian cuisine for lunches, things that people may not have tried before. When the Night Market in AsiaTown started up, he decided to apply. 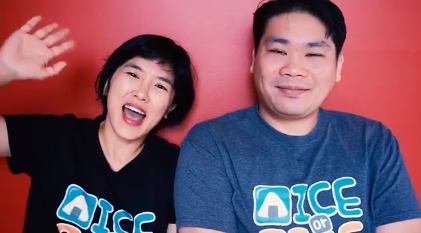 "I told him, 'But we're not professional cooks,'" Jessie recalls.

The first event was tough, trying to keep up with demand. But, Jessie says, she had fun.

Jessie, who immigrated from China back in 2004 to marry Andy, admits she didn't like cooking before starting Ice or Rice; it was just something she did to feed her family. But through making the videos, her interest grew.

"I looked at a lot of videos and a lot of times they just show you how they did it, but they don't explain why, and I always wondered why," she says. "I didn't know why my mom did things or why the recipe said that. And when I did the research, I was surprised there wasn't a lot of why."

Once she started researching why certain techniques were used in Asian cooking — to tenderize a meat, or to up a certain flavor — the love of cooking clicked. Now every video the pair makes explains why certain steps are used.

Besides the Night Market, which they've participated in the past three summers, the Ng's also host pop-up food events and Asian grocery store tours. Andy, a civil engineer, and Jessie, a freelance graphic designer (those adorable animated graphics in the videos are all her) say they like the freedom that not owning a full-time restaurant allows. They can experiment with new dishes and not be confined to meeting a bottom line. The plan is to continue with their website, perhaps sell Asian pastries, but nothing that would tie them down.

The Ng's say most of their YouTube channel viewers, which number in the tens of thousands, come from places with higher Asain populations, like New York and California. They have a lot of viewers in Singapore and Malaysia too. But they want to entice Clevelanders as well. That's why they started hosting Asian grocery store tours, so people can try new flavors and not be as intimidated by certain ingredients. The more questions people ask, the better.

When it's just them at home, stir-fry vegetables and quick foods like ramen feed their family. They use a rice cooker daily.

The next Ice or Rice Asian grocery tour and tasting event is Jan. 8 at Asia Food Co. Purchase $25 tickets here.