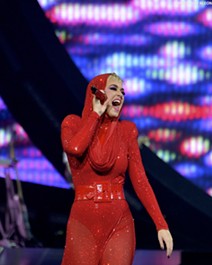 As close to an hour elapsed after the dance pop duo Purity Ring’s opening set at last night’s Katy Perry’s concert at the Q, parents and teens alike began to grow restless.

At one point, the kids even started to chant, “Katy! Katy! Katy!”

Perry would eventually emerge on a mechanical star-like swing that extended out from behind the stage's giant eyeball-like structure that functioned as a backdrop and video screen.

Dressed in shades and a slinky glittery red outfit, Perry played the part of diva to a tee during the highly visual two-hour set.

And if parents were still fuming about her late arrival, she did offer an apology mid-way through the show and ensured she'd make up for it with a spectacular show.

The set lived up to that promise.

Backed by a seven-piece band that included two terrific backing singers who often took over lead vocals when Perry was involved in some of the show’s more complex dance routines, Perry played a 20-song set littered with hits.

She expertly blended trap, hip-hop and pop in “Dark Horse,” a tune that featured wonky beats and heavy, pounding drums. A New Order-inspired synth pop intro gave “Teenage Dream” a retro feel, and the song segued nicely into the giddy pop number “Hot N Cold,” for which Perry stripped down to a halter top with a flashing LED sign attached to it.

Perry did a split and then a handstand to kick off the catchy “California Gurls,” a tune which featured a nifty pre-recorded backing track courtesy of rapper Snoop Dog, who guests on the studio version of the song. Perry endeared herself to the audience by changing the tune's lyrics to “Cleveland girls.”

After making a phone call to her mother on a giant red phone, Perry launched into “I Kissed a Girl,” a tune that benefited from retro-sounding synthesizers and a shimmering mid-song guitar solo. She then slipped into a black latex suit and thigh high boots for “Déjà Vu,” a soulful track from her latest album, Witness.

For an acoustic segment that featured the power ballad “Wide Awake” and “Thinking of You,” Perry sang from a swing that took her into the Q’s rafters. She didn't alway sing those tracks on key, but the theatrical presentation made up for any deficiencies.

The visuals constantly shifted throughout the show as Pac-Man-inspired graphics punctuated the poppy “Part of Me,” and a giant lion’s head dramatically emerged from the rear of stage during “Roar.”

Throughout it all, Perry catered to the kids in the crowd. She brought one young fan onto the stage to wish upon a star and invited another family’s dad onto the stage for a friendly game of hoops prior to her performance of “Swish Swish.” These bits ultimately disrupted the pacing of the show, but they displayed why Perry’s young fans remain so enamored with the singer, who appeared to really enjoy interacting with her fans.