Paid Parking at West Side Market Lot Begins This Month 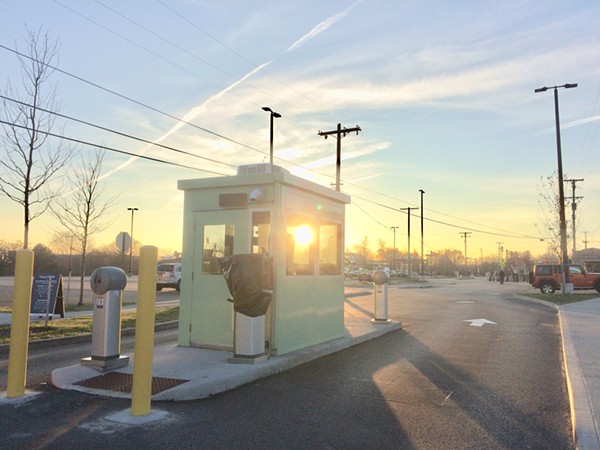 Update: Paid parking at the West Side Market lot will begin on Feb. 27, the city announced today.

A quick recap: The first 90 minutes will be free between the hours of 6 a.m. and 6 p.m. After that it'll be $1 per hour with a max of $10 per day. You'll grab a ticket as you pull into the lot and then either pay with credit card while exiting or cash or credit at one of the pay machines located in the area.

(Original story 12/11/17): The new payment structure at the West Side Market parking lot hasn't yet come online yet, but the equipment was recently installed.

The plan: Anyone parking between the hours of 6 a.m. and 6 p.m. will receive 90 minutes free upfront. Beyond that, drivers will pay $1 per hour with a max of $10 per day. The new structure will begin on or around Jan. 1, according to those close to the operation. No official date has been set.

"There will be free parking and available spaces for market shoppers," West Side Market Tenants Association President Ed Meister tells Scene. "That's going to help us quite a bit, and that's going to ensure that we have adequate parking for market customers."

But while the 90 minutes of free parking will certainly help the market's customer base, the overall payment structure is indicative of broader shifts in Ohio City and at City Hall.

The city has owned the triangular parking lot behind the West Side Market for decades. And for decades it leased the lot to the market's tenants association at no charge. The city let the lease expire in August 2014, teeing up the three-year march of renovation and reconfiguration to the tune of more than $3 million.

In those ensuing years, market tenants have voiced some opposition to the move and to how neighborhood stakeholders make decisions — both in regard to the lease termination and to the notion that a pay scale will be introduced at the lot. It's a long-running point of contention, as more businesses move into Ohio City (and, with them, more customers and employees with cars).

Even before the lease ended, tenants were frustrated with how cars would just sit in the lot for hours. Browns game shuttle services left cars sitting in the lot for hours; brunches would turn into weekend bar-hopping, which led to cars being left overnight.

With no plans to introduce a parking garage in Ohio City, the expanded parking lot plans were seen by the city as an amelioration of neighborhood growing pains. (Public transit isn't easing those pains as much as one might like; last year saw a record low ridership rate on the RTA, which has a Red Line stop across the street from the market.)

For now, and especially during this holiday season, the lots behind the market remain as busy as ever.