Before going any further: Let's stress the headline and reiterate that that no dispensary licenses have yet been awarded in Ohio. Through a public records request with the city of Cleveland, though, we've obtained all the addresses that are attached to applications for medical marijuana dispensary licenses. Some will win those licenses, and most will not.

The state has 57 licenses to distribute across Ohio. Statewide, 370 businesses applied for those licenses. It's expected that the northeast part of the state, including Cuyahoga County, will receive 18 licenses before the medical marijuana law is officially active in September 2018.

Below, you'll find the addresses attached to applications filed from within the city of Cleveland. All told, 25 businesses filed zoning forms in Cleveland alongside their state license applications; most of them went on to to file state paperwork. (The forms represent a formality in the process, confirming only that the address is not located in a zoned area that prohibits marijuana businesses from setting up shop.)

See an interactive map of these addresses here. 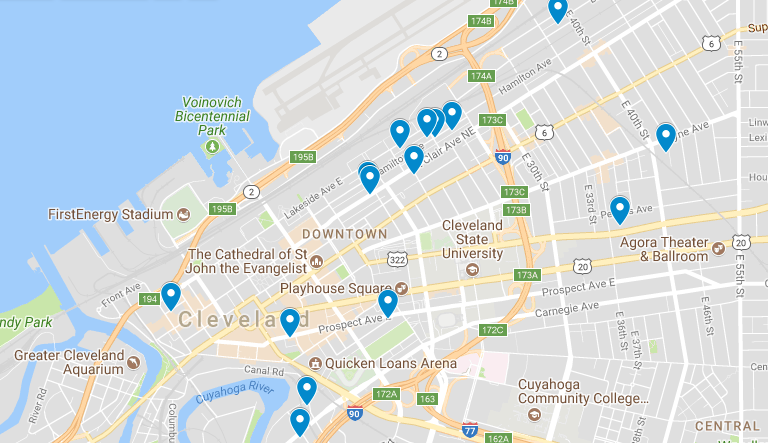 Each applicant paid a nonrefundable $5,000 fee for a shot at a dispensary license. GTI Ohio Inc., a company that lists local investor and businessman Bobby George as a contact, applied for licenses at 12 locations across the state, including three in Cleveland. Glasshouse Retail, which lists Saucy Brew Works partner and REspring co-founder Brent Zimmerman as a contact, applied for four licenses.

Recently, Cleveland City Council approved planning and zoning regulations that line up closely with how the state has regulated where a medical marijuana business could be located: namely, nowhere within 500 feet of schools, parks, churches and libraries.

There is no firm date set for when dispensary licenses will be approved and awarded.

Cultivation licenses have already been awarded; there will be no marijuana grow sites in the city of Cleveland for now. Eastlake and Parma will each house a cultivation business.

(Dec. 14 update: The Ohio State Board of Pharmacy will allow dispensary applicants to edit their forms from 8 a.m. Dec. 18 to 8 a.m. Dec. 20 due to technical problems with the state's online application process.)