No Conga Beat Unsung, No Dancing Spin Un-spun in "On Your Feet" at Playhouse Square 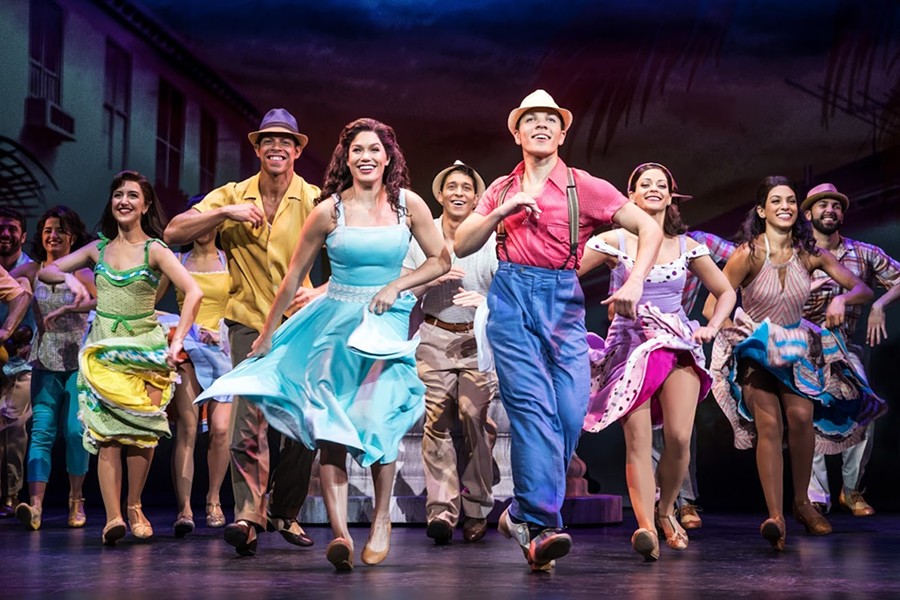 Is it ever proper to set your critical thinking aside and just immerse yourself in a show for the sheer pleasure of it? After all, every show that raises its curtain doesn’t have to carry a big message or leave you with indelible characters, does it?

These are the thoughts that go through one’s mind when encountering the colorful wave of music and dancing in On Your Feet, the Emilio & Gloria Estefan Broadway Musical. And just like that subtitle, this show is bracingly direct and no-nonsense. It wants to be liked—no, loved—by the audience, and it leaves no conga beat unsung and no dancing spin un-spun to achieve that goal.

As you probably know, Gloria Estefan is the Cuban-American singer and songwriter who, along with her hubby and business partner Emilio, put together the incredibly successful group called The Miami Sound Machine. And a machine it was, from the mid-1970s and through the 80s, churning out songs with irrepressible beats such as “Conga,” “Dr. Beat,” and the sizzling “Rhythm Is Gonna Get You.”

Of course, this isn’t a concert, there’s a story to tell. And similar to a basketful of puppies, the book by Alexander Dinelaris is adorable and not challenging in any way. Oh sure, there are some formula setbacks when a couple producers don’t immediately cotton to the Estefan brand. Will the Cuban radio station disc jockeys in Miami ever play their music, since it’s in English? Will the English-speaking stations play Latin tunes? Not to worry, we know those objections will soon be washed away on the tsunami of songs and dances to come.

One of the more appealing segments of the story is when we see Gloria and Emilio trying to get a foothold in the music business by playing at any venues they can scare up. This means they’re doing their thing at weddings, Shriners conventions and Bar Mitzvahs—anywhere they could go to get exposure for their infectious musical hybrid involving thumping guitars and loads of Latin rhythms.

From the personal perspective, the show doesn’t delve too deeply into Gloria’s relationship with Estefan. No traumas here since they begin in love and just continue to love each other. However, Gloria E. does have a falling out with her mother Gloria Fajardo, who suffers from some envy since her budding singing career (she was once considered to be the Hispanic voice for Shirley Temple) years before never came to fruition. As Gloria, Nancy Ticotin delivers a powerful sense of what might have been in a singing flashback to her glory days.

However, young Gloria’s grandma Consuelo (a warm and amusing Alma Cuervo) keeps pushing for her granddaughter to be a star and eventually, well, you know what happens. The one big wrinkle in this otherwise happy journey is when Gloria is seriously injured in a highway accident. But after emergency, and very risky, spinal surgery Gloria is reunited with her mother and all is well.

This engaging production directed by Jerry Mitchell features spectacular choreography by Sergio Trujillo, which is performed with unstinting enthusiasm by the talented ensemble. And one young performer, Kevin Tellez (rotating with Jordan Vergara), is a nonstop dynamo, dancing up a storm in a couple different roles.

As Gloria Estefan, Christie Prades does everything necessary to convey the essence of this woman, who is basically a shy person with a gift she couldn’t hide. She is matched by Mauricio Martinez as Emilio, who exhibits a nice understated manner with his more amusing lines. When their music is accepted with verve in Sweden, Emilio is stunned by all those white people dancing: “It looked like Q-tips bouncing all over!”

More than 25 songs from the Estefan song catalog are trotted out, and the beat never slows since David Rockwell’s scenic design moves tall panels of shuttered windows and other elements around with as much grace as the dancers. With the dialog butted up against compelling orchestrations, there’s a propulsion to the show that keeps it moving even when the story line is not particularly gripping.

At times, the script gives a little too much self-conscious homage to Emilio’s business chops. When he holds out for a multi-million dollar contract for Gloria, a pal tells Emilio, “How do you sit down with balls that size?” And the multitude of encouraging letters that fans sent to Gloria during her long recuperation from the accident, some of which are read out loud, border on the treacly. But most of the time, the script doesn’t intrude and get in the way of the music.

Perhaps the most telling moment in the show is when Emilio references his Latino community and says, “This is what America looks like.” Indeed it does, and that’s one message that still needs to be delivered to one particular house in Washington DC.