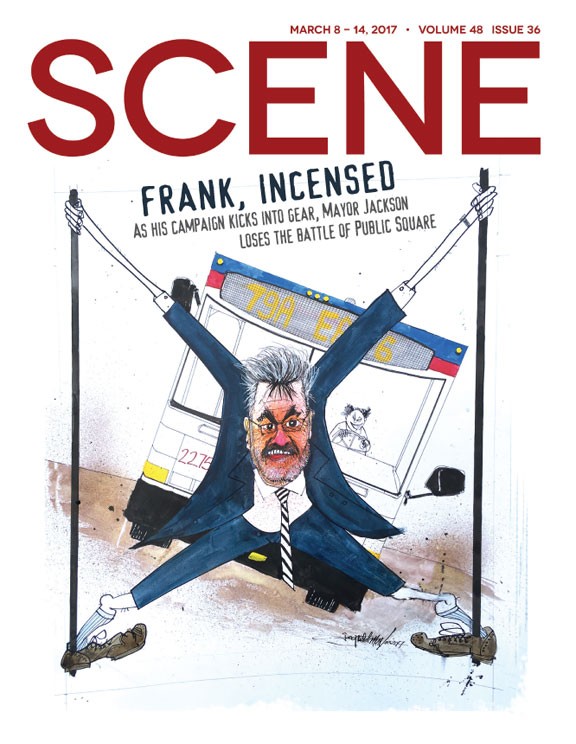 In an interview with Cleveland Magazine, conducted the day after he won the mayoral election in November, (the unabridged version of which was published online yesterday), Frank Jackson suggested that inaccurate reporting was partially to blame for the Public Square controversy of 2016 and 2017.

"Accurate reporting would help," Jackson said, when asked why many Clevelanders were under the impression he had wanted the Square closed permanently to RTA buses. "People would call me or people, when I went out to the community and I would talk to individuals or at a community meeting and they would ask me, I would explain it to them. They said, 'Well, that makes sense, but that's not what we were told.' I said, 'I know, but if you did not hear me say it, I didn't say it. This is what I'm telling you.'"

Jackson also claimed, as Cleveland.com's Chris Quinn has, that the Public Square debate was magnified in regional importance by the 2017 election season. The controversy, Jackson said, was in fact a "complete politicization," of a simple issue.

The mayor felt that his views had been repeatedly misrepresented.

"I never said the square should be closed," he said. "What I said is, we should engage in a process to determine two things: whether or not it was feasible to close it and did not provide a financial hardship to RTA; and if operationally it worked, and if the financial hardship was not that severe, then how do you compensate for that? If it in any way was a financial hardship or feasibly you just couldn't do it, then that was just supposed to be the determination."

But the reporting on Public Square — spearheaded by the Plain Dealer's Ginger Christ and supplemented by myself and a handful of TV newshounds — accurately recounted the above. In fact, the debate over Public Square was one of the more aggressively and regularly covered issues from November, 2016, until March, 2017, when the Square was re-opened to buses at last.

"Everybody knows the conspiracy, don't they?" Jackson responded to a reporter. "People can believe what they want to believe, and it was not [that I intended to close it to buses from the beginning]. In our initial conversations with RTA, I said to them, 'You know what my preference is, but if you can demonstrate to us that there's an operational and financial harm to RTA, then I will accept that.'"

Jackson's views were repeated in Scene's lengthy dismantling of the safety issues that the administration continually cited. That Jan. 9, 2017, story was, "Public Scare Tactics: Jackson Doubles Down on Terrorism, "Irreparable Harm" Looms":


Since its first discussions with RTA after the Republican National Convention, the city has always wanted two things, Jackson said: (1) a demonstration by RTA of the operational and financial burden caused by Superior Avenue's closure through Public Square, and (2) a safety plan which addresses terrorism.

Jackson has indeed been consistent in his messaging. No one has accused him of being inconsistent! But his analysis for Cleveland Magazine was just plain wrong. The actual problem, as far as he was concerned, wasn't reporting that misrepresented his stance; it was reporting that disagreed with his stance.

Here he is later in the interview:

"We are still concerned about [Department of] Homeland Security issues. I don't care what anybody says. If it was not feasible to close it, for economic or for expense reasons and operational reasons, then you have to demonstrate to me that it would have Homeland Security concerns addressed."

In other words, Jackson created a hurdle beyond his initial stipulations, one that was much more difficult to defeat.

This hurdle was likewise reported upon earnestly and in considerable depth. In the best piece on the subject, Ginger Christ asked local experts to assess the threat of terrorism on Public Square.

The experts said that Public Square shouldn't be seen as any more of a security risk than other popular venues in Cleveland. "If you start down that rabbit hole of defending everywhere, you end up defending nowhere," said one. Events would be of much greater concern than day-to-day operations, said another.

Christ duly reported that the city was nevertheless still concerned about terrorism:


The threat of terrorism in Public Square has been a regular topic in the controversy over whether or not buses will be allowed to use the stretch of Superior Avenue through the square. The Mayor's Office and the City's police chief, for months, have cited terrorism concerns as one reason to keep buses from crossing the square as intended in Public Square's renovation.

And while Scene, (along with City Council, for the record) found Jackson's terrorism rhetoric unconvincing — for one thing, as an expert explained: if you were serious about it, you'd have to defend the entire perimeter, not just the central bus lanes — we nevertheless printed Jackson's quotes and embedded video of a press conference on the subject.

But we also probed those quotes. We didn't accept his stance as gospel fact. Furthermore, we noted the ultimate problem with his stance: that he'd adopted it after the renovated Square had been designed, built and paid for (at a cost $50 million). Jackson's intractable stance, and what it portended for the city's relationship with the Federal Transit Administration (FTA), threatened the long-term financial health of the RTA.


In its Dec. 20 letter, the [FTA] made clear that due to the city's unwillingness to change its position and open the Square (as it is legally obligated to do under the stipulations of the 2004 federal grant) it must initiate debt collection.

In one of his more far-fetched allegations in the press conference above, Jackson hinted (~28:55) that FTA is merely raising the specter of the $12 million debt as a kind of diversionary tactic, to distract from the the fact that it hasn't fulfilled certain safety obligations. Jackson referenced federal safety mandates continually, if obscurely, throughout the press conference.

Jackson, suggested, furthermore, that the $12 million debt collection was not only "irresponsible" (because: terrorism) but without cause.

FTA already has told them, and in quite specific terms.

In its August 10 letter, FTA warned RTA that "a permanent closure of Superior Avenue through Public Square would constitute a breach of the [Full Funding Grant Agreement.]" In an October letter, FTA reiterated that point and "stated specifically" that RTA would owe the $12 million debt "arising from the breach."

The breach is literally the closure of Superior Avenue. Nothing more needs to be divined or analyzed.

But still, Jackson pressed the FTA to fulfill its mandates and perform a safety study on the Square. These mandates turned out to be imaginary.

The FTA told Scene in January that it had no specific requirements for transit agencies regarding terrorism preparedness or mitigation. "Terrorism is an issue covered by the Transportation Security Administration, not FTA," a spokesperson said.

The reporting on this subject clarified, rather than clouded, a sometimes-Maleficentianly thorny issue. And while blaming the press is all the rage these days among politicians, the fact remains: without Ginger Christ's daily, dogged, accurate reporting on Public Square, the public it was designed to serve would have been far less informed.

The other narrative thrust around which consensus appears to be forming is that the Public Square controversy was especially (or, taken to its extreme, only) controversial because 2017 was an election year. Jackson's unilateral decision was seen as a political vulnerability, in this version of events, and mayoral opponents leaped upon it as a hot-button issue to wield against the incumbent.

Parts of this are true, but I don't think the narrative should be accepted and repeated without scrutiny either.

For one thing, unlike the Q Deal, which indeed was a prominent and much-talked-about issue during the summer primary campaign season, (not to mention a regular fixture of the mayoral Q&As), the Public Square debate was deeply in the rear view by the time the campaigns were underway.

If and when public transit was discussed at mayoral events, it was almost always from the perspective of sustaining the RTA in the face of imminent revenue losses. Candidate Tony Madalone got some positive press for proposing a city department of transportation, and other candidates got on board. It was a smart idea which Frank Jackson has shown no sign of embracing or exploring.

But Public Square wasn't just an "election-year issue." City Council, for example, many of whose members are sad-sack establishment partisans and sycophants, was almost universally incensed. At a transit committee meeting shortly after the initial announcement, council members took turns bashing the Mayor and his secretive backroom decisions.

Councilman Brian Cummins regarded as preposterous the Mayor's having made the decision without ever having opened Superior. How could we know it's a safety hazard if we havn't even tested it? He wanted to know. He was also "incredulous" that the Square's alleged popularity was being used as evidence that Superior must remain closed.

Others, including Brian Kazy, Martin Keane and Kerry McCormack, all voiced their displeasure with the administration's decision and its rationale. They were furious that they hadn't been informed. All this took place nearly a full year before the 2017 general election.

Compare that response, once again, to the Q Deal, (another issue on which council was kept in the dark). When it was first discussed at council, many of the gathered legislators praised the Q and its economic impact, lofting softball inquiries at the Cavs' presenters: "We're investing in a facility, not a franchise, right?" asked Councilman McCormack.

Polensek called the display a "political love-fest" and said he was surprised that cheerleaders weren't present for the hearing. That hearing occurred in late March, several weeks after Public Square had already re-opened to buses. Council President Kevin Kelley orchestrated the rejection of petition signatures in late May — this was an election-season issue, for better or worse.

The Public Square controversy was controversial for many reasons — among them the weighty financial implications; the bold and remorseless expansion of Frank Jackson's mayoral powers; the utter disregard for established plans, policy, and taxpayer dollars.

The 2017 mayoral election was certainly a factor in the Public Square debate — look no further than Councilman Zack Reed's recurring presence at protests —   but it was by no means the exclusive factor, and not necessarily even the most important one.