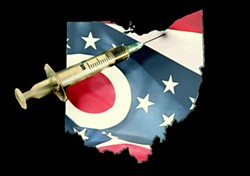 There were at least 822 overdose deaths in Cuyahoga County in 2017 — from heroin, fentanyl, cocaine, carfentanil and other opioids — according to a report from the county's medical examiner.

The surge — 156 more than the previous year — is not surprising. Opioids are a continuing and growing public health emergency, and the numbers bear that out.

The stats, sadly, are preliminary and don't include finalized causes of death on 50 pending cases from December on which the department is still awaiting results.

If there is a bright side, it's that it could have been even worse. If not for the efforts of Project DAWN, the overdose education and naloxone distribution program created by Dr. Joan Papp of MetroHealth that's grown from pilot program to statewide resource, the report estimated the death toll would have eclipsed 1300.

More details — such as an increase in African American overdose deaths involving fentanyl, which tracks with an alarming national trend — and stunning stats — there were 867 more fentanyl-related deaths in the past two years than the previous 10 — can be found in the report.