According to an email obtained by KentWired and a tweet from Kyle Bristow, an alt-right lawyer who represents Richard Spencer, Spencer's tour manager, Cameron Padgett, has requested to rent space at Kent State on May 4, 2018, for a speaking engagement. The event would include Spencer and fellow white nationalist Mike Peinovich (Enoch). It would also, of course, occur on the anniversary of the fatal shooting of four students on the campus back in 1970. 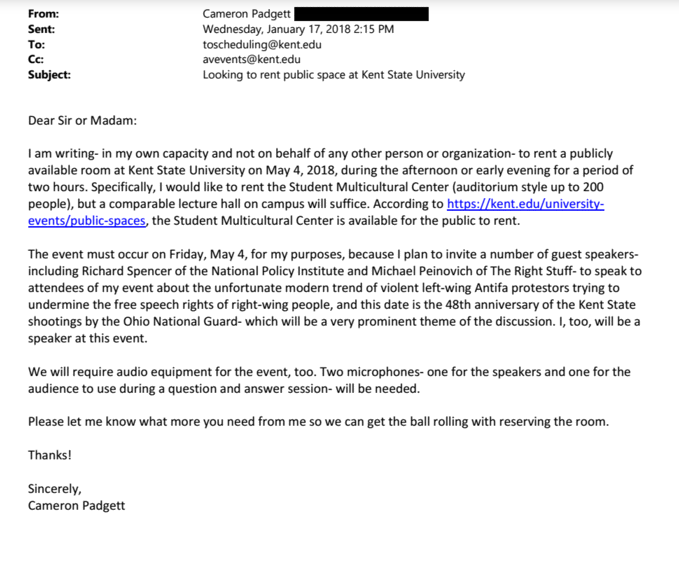 Today @CameronVPadgett requested to rent for 5/4/18 the publicly available Student Multicultural Center on the campus of Kent State University. He is planning to speak and will invite @RichardBSpencer + @mikeenochsback to talk about Antifa thuggery + how universities can respond. pic.twitter.com/tcilKCGIFL

Spencer's appearances on college campuses have been met with outrage as well as debates about free speech. Some schools, including Penn State and the University of Florida have denied his requests or requests on his behalf, citing safety concerns. Some of those decisions have been the subject of lawsuits or threatened legal action. Today, for example, Michigan State, which had previously declined to have Spencer appear on campus, came to a settlement agreement allowing him to speak after a lawsuit filed by Bristow.

Padgett's request to Kent State will surely be met with visceral reaction, not least because of the solemn date to which it's attached.

The university hosts a commemorative ceremony each year on May 4th to honor the four people shot and killed by the Ohio National Guard in 1970. This year's keynote speaker has not yet been announced. Last year featured Lecia Brooks from the Southern Poverty Law Center.