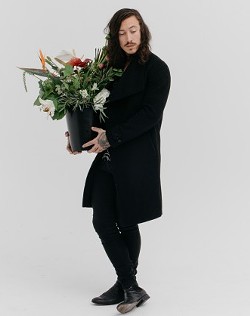 With his latest album, White Noise, singer-songwriter Noah Gundersen set out to expand his sound and experiment. Album opener "After All (Everything All the Time)" features soft vocals and an elegant string arrangement courtesy of his sister Abby. He recorded the album at the Ballard Baitshop in Seattle, a place that used to be a sail warehouse in the ’40s. He spent about eight months there and then finished the album at other studios around Seattle. One of the album’s many highlights, “Number One Hit of the Summer (Fade Out)” benefits from soft-to-loud guitars and pounding drums. On it, Gundersen ominously sings, "Deer in the headlights, frozen in the street/Head above the water, still swimmin’ up stream." A music industry party he attended became the subject of the Radiohead-like “Cocaine, Sex & Alcohol (From a Basement in Los Angeles),” and "Fear & Loathing," another album highlight, has a classic folk vibe to it. Expect to hear these songs and more at tonight's show. (Jeff Niesel), 8 p.m., $15 ADV, $18 DOS. Beachland Ballroom.

A singer-songwriter from Hernando, Mississippi, locally based Matt Hectorne has been writing songs since he was 10 and played in bands throughout high school. Hectorne's new album, Work, shows off his songwriting chops. He started writing the tunes about two years ago but wrote the majority of the album in the first half of 2016. He recorded the tunes in September and October of 2016 at a friend's house in East Nashville. With their cooing vocals and slide guitars, songs such as "Only Way Into Your Heart" and "It Don't Matter at All" have a Wilco vibe to them, and the mellow title track possesses a Grateful Dead feel. In Hectorne's talented hands, the songs come across as natural roots rock explorations. Expect to hear many of Work's songs when Hectorne and his local backing band play tonight in support of its release. (Niesel) 8:30 p.m., $10 ADV, $12 DOS. Beachland Tavern.

When the guys in the regional band Oliver Hazard won a Facebook raffle for one song's worth of studio time, they instead played 10 tracks straight through live, recording what one publication has described as "a folk-pop masterpiece."
About 100 people came to the show the band played in Waterville right before the end of 2016. The band's been going strong ever since. The twangy “Caesar Knows” benefits from harmony vocals and sounds like something that might be by Avett Brothers or Lumineers. The song received 100,000 listens in the first month on Spotify. Expect to hear it at tonight's show. (Niesel) 9:30 p.m., $8. Grog Shop.

There's something about living through the cold and bleak winters of Minnesota that forces folks to get in touch with their feelings. As is the case with Minnesota-based trio Tiny Moving Parts, a rowdy group content with making music that's part math rock and part screamo — a combination one doesn't hear often. The group's brand new album, Swell, proves that the thinking (highly-composed noodle-y lines) and the feeling (heavily-emotional high school student-approved lyrics) can work well together. The group formed when band members were in high school themselves, and their technical skills have certainly grown over the past decade, even if their love-lorn song subjects have remained the same. (Laura Morrison), 8 p.m., $13 ADV, $15 DOS. Mahall's 20 Lanes.

A PhD candidate in electrical engineering who’s done research for the U.S. Air Force and taught at the International Space University in France, Salem, Ohio native Dustin Bates set his studies aside to pursue the hard rock act Starset. Bates's background clearly influences the band. Live performances follow a space-themed narrative as the songs' themes center on how science and technology affect society. Tonight's show promises to be a visually and aurally "immersive" experience. (Niesel) 7 p.m. House of Blues.

In the tradition of guys like Jerry Lee Lewis and Fats Domino, J. Roddy Walston doesn’t just play the piano. He bangs away on the keys like a man possessed. His raw garage rock tunes that have the same kind of swagger you hear in tunes by Kings of Leon and the Black Keys. So how the hell did Walston learn to play the piano? His grandmother was a gospel/honky tonk country piano player who taught him the tricks of the trade. Walston, who insists he'll never play keyboards, tours with a piano and puts on a helluva show. He comes to town tonight in support of last year's Destroyers of the Soft Life, an album of urgent indie rock tunes that veers from Nirvana-like punk ("You Know Me Better") to fervent drinking ballads ("Blade of Truth"). (Niesel), 9 p.m., $20. Grog Shop.

When he first started to write, WHY? frontman Yoni Wolf considered his casual rap compositions to be “kid stuff.” He had grown up as a drummer and envisioned his music career taking him in a different direction. Now, his work revolves around collaborations, poetry and remixes, his vocal delivery sliding almost undetectably from spoken word to rap. WHY? positions Wolf’s vocals on a bed of indie rock and ambient, beat-based instrumentation. He’s not afraid to break into full-fledged croon mid-line, should it be warranted.(Bethany Kaufman) 8 p.m., $16 ADV, $18 DOS. Beachland Ballroom.