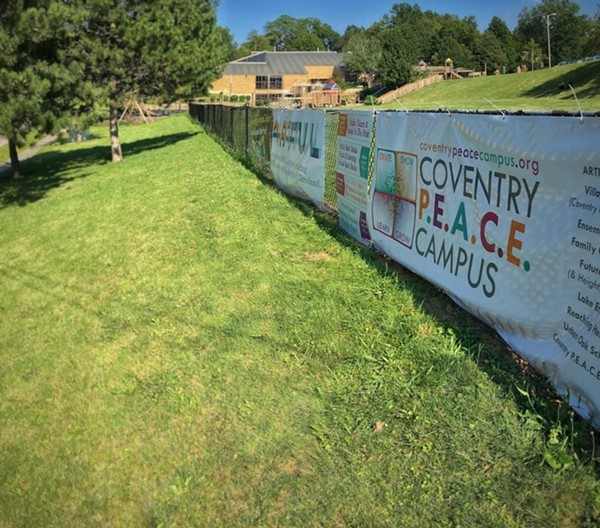 Last May, the Coventry PEACE Campus faced an uncertain future. The Cleveland Heights Board of Education had announced plans to sell and redevelop the former Coventry School site. City officials said the six acres of grounds needed $1 million worth of repairs, which wasn't feasible with its current budget. This left the 11 art and community non-profits that called the campus home wondering when they'd be asked to leave.

After nine months of proposals, planning and fighting to keep Coventry PEACE (People Enhancing A Community’s Environment) building and park intact, the tenants now know they are staying put.

Earlier this week, the Cleveland Heights-University Heights Public Library System board of trustees made the decision to purchase the property and continue the Peace Campus' mission. The site officially sold for just $1.

“It’s been a full-time job for me for about eight months,” Brady Dindia, of the non-profit Artful Cleveland, told Freshwater Cleveland. “We spent the summer and fall months circulating questionnaires and petitions, asking what the community was thinking. Because, if we didn’t have the support from the community, there was no point.”

Since 2006, local non-profit groups have leased the former school space. In that time many of the organizations have raised money to pay for renovations themselves.

Library Director Nancy Levin told Freshwater Cleveland she was glad the public land would not be put into private hands.

“We attended a lot of community meetings and we heard the community saying they care about the park,” she said.

An official agreement with the tenants has yet to be worked out, but ownership is slated to switch hands March 31. The library has plans to eventually dedicate some of the PEACE Campus space to its various community events, classes and programs.