Roldo Bartimole, the Conscience of Cleveland, Signs Off After 50 Years 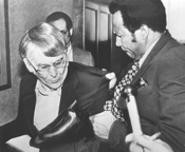 In a short piece published Monday, local independent journalist Roldo Bartimole, once called "Cleveland's gadfly,"  announced his retirement. There is a time, he wrote, "to sum up."

Bartimole, after short stints at both the Plain Dealer and the Wall Street Journal, set out on his own in 1968 (the day after Martin Luther King Jr.'s assassination) to publish a newsletter called Point of View. In its pages, he raked muck and spoke truth to power, holding public leaders and the business community accountable for the poverty and misery of the region.

Bartimole single-handedly published Point of View until 2000, during and after which he wrote for a number of local outlets including The Cleveland Edition, the Free Times, Cool Cleveland, and, lately, Jeff Hess's blog Have Coffee Will Write. He was awarded the Greater Cleveland Community Shares Award for Social Justice Communications in 2001 and was inducted into the Cleveland Press Club Hall of Fame in 2004.

"They and so many more all helped make 50 years a tough, demanding but useful way to spend a life-time of work."

The complete Point of View is available as part of Cleveland State's University's Memory Project, and can be viewed here.

Roldo is penning a two-part recap of his career. The first installment, recounting his arrival in Cleveland and the logistics of Point of View, is already online. The second installment is coming Wednesday.