America's Troubles at the Center of 'Jelly Belly' at Ensemble Theatre 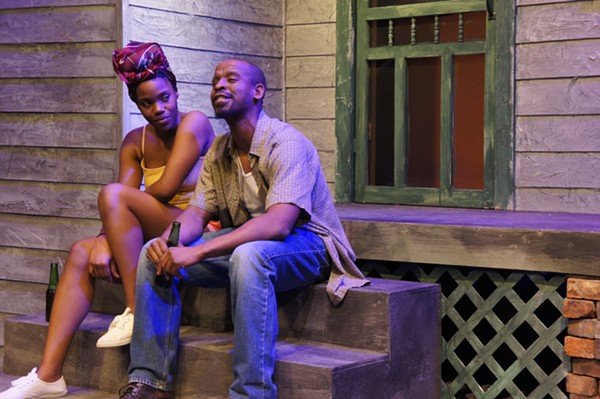 Can you steal a show when you’re half asleep while you’re on stage? Normally, no. But in the case of Robert Hunter, who plays the drug-addled Bruce in Jelly Belly, now at Ensemble Theatre, that is exactly what he does.

Bruce is just one element in this drama by the acclaimed African-American playwright Charles Smith that takes place on and around the front porch of a home in a downtrodden black neighborhood on the south side of Chicago. And thanks to an exceptional cast, under the direction of Ian Wolfgang Hinz, and a darkly comic script by the playwright, there’s a real fire in this Belly.

The time is 1980, but it could be almost any other contemporary time when drugs are awash in lower income communities and African-American men are seeking ways to assert their pride without being swept up in illegal activities. The house belongs to Mike and Barbara, which Mike pays for through his grunt job for a construction firm.

Mike is also serving as a mentor, of sorts, to a young man named Kenny who is trying to learn the ropes of construction, coming up with architectural ideas for Mike’s house renovation. But they are all a bit skittish since the primo drug dealer in the area, Jelly Belly, is just out of prison and they know he will be making his presence known.

And weaving throughout the proceedings is Bruce, a one-man drug swamp who can barely walk down the street or lift his head. When Jelly Belly (a calm and chilling Greg White) shows up, everyone’s attitude changes. Mike becomes defensive, since he’s been benefitting from Jelly’s largesse when it comes to sampling drugs. And Kenny suddenly loses his early fear and gravitates to Jelly, fascinated by the stories and promises the older man weaves.

It’s all a con game, of course, and playwright Smith deftly tells this depressing story with a fine and often humorous touch. And as in any con game, you don’t see the bad news coming until it’s too late. It is a cutting, subtly brutal portrait of what goes on in black communities where hope has taken the last train out of town.

The performances for the most part are spot on. As Mike, Lashawn Little strikes just the right notes of fear, anger and vulnerability. Mary Frances Renee Miller is fierce and funny in her short time on stage. And Jabri Little is endearing for a while as Kenny, although his change in attitude regarding Jelly Belly seems a bit too pat.

Although he has the fewest lines, Robert Hunter is absolutely hypnotic as Bruce. While never drawing attention away from the story, Hunter manipulates his body and face in ways that convey just how screwed up Bruce is—slumping down for a nap against a fire hydrant, fluttering in terror before Jelly Belly, and bragging about his “strong mind.” It is a masterful portrayal with a minimalist touch, and it is worth the price of admission.

But then, so is the whole show. It is a snapshot of the trouble this country is in, and why it is so hard to make it better.