13 Bands to See At This Year's Brite Winter Festival 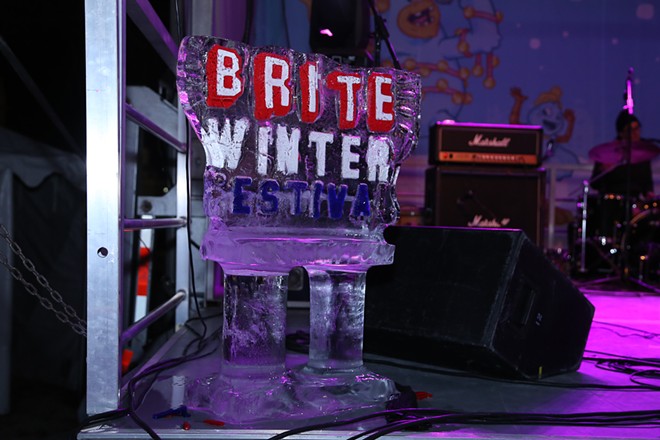 This year's Brite Winter Festival promises to be bigger and better than past fests as more than 40 bands will perform on six indoor and outdoor stages, and assorted vendors will be on hand as well. There will also be ice carving demonstrations and "fire & light" dancing. The event takes place from 3 p.m. to 1 a.m. on Saturday, Feb. 24, on the West Bank of the Flats.

The annual winter music and arts festival began a few years back in the Flats near what is now Merwin's Wharf. Organizers had to learn a few hard lessons — the event took place in the midst of a blizzard in year one — before they were able to turn into the well-oiled machine it has become.

For the next four years, Brite Winter took place in Ohio City before moving to its current location in 2016 where it's been hugely successful.

Admission is a $5 donation, but Brite Winter also offers VIP packages which include enhanced viewing near the outdoor stages, heated tent access, private restroom trailers, and refreshments and snacks.

Here are a few bands worth checking out at this year's event.

This is a local hip-hop duo that's changing the music industry one fresh song at a time. The group's lyrical imagination, rapped by Playne Jayne, flows over the soulful beats of DJ Red-I. Their sound is real and timed to perfection. What began as spontaneous sessions in Red-I's apartment became a full-length project, which led to their debut album We Are Fresh Produce in 2015. The duo's ingenuity will have you feeling laid back with a steady surge of head bobbing. Already responsible for three albums, they show no signs of stopping. Songs such as "Pocket Watchers" and "No Diamonds" especially keep it crisp. (Matthew Poshedley)

Singer-guitarists Brent Kirby and Bobby Latina have played together since 2005, when they would jam at the now-defunct Town Fryer. The Jack Fords formed at about that time too and the local roots rock act have become one of the city's best bar bands. With its snarling vocals and restrained guitar riff, the title track to its 2015 album, There It Is, sounds like a cross between vintage Tom Petty and AC/DC, and "Getting Back" comes off as a rowdy garage-rock tune with a good, greasy guitar riff. The album shows off the band's ability to veer from country-ish ballads to hard rocking anthems. (Jeff Niesel)

Chemist (Thomas Sheridan) and Mooke (Rodney Mynatt), the duo that formed the local hip-hop group Smoke Screen some 10 years ago, grew up together. Since a show at Peabody's a few years ago, the group has been plenty busy and shared the stage with acts such as Kid Cudi, Wale and People Under the Stairs. In 2007, the band released Self-Educated Learning Process, and the group dropped a few "free projects" before releasing the full-length follow-up, Imagination Beyond Illustration, in 2010. The band recorded the album Return to the Sun at its own studio and outsourced the mixing. Directed by Turnstyle Films, the music video for the single "Breakbeats and Bass" features footage from throughout the past decade spliced with current-day shots of the group. The album kicks off with "Eternal Flame," a tune that features percolating synths and rattling bass beats as Sheridan and Mynatt deliver rapid-fire raps. Last year, the UK record label Collective Resonance even released a new compilation on vinyl that features the band's single "Breakbeats and Bass." (Niesel)

Punch Drunk Tagalongs come from a long tradition of bands led by fierce female singers. Anchored by equally vulnerable and ferocious lead singer Alisha Stahnke, the band writes songs that run the gamut of emotional intensity. Since their performance at last year's Brite Winter, the band has toured extensively throughout Ohio and surrounding regions, continuing to develop an easy chemistry. On their recently released single, Hazy, from their upcoming debut album, pulsing guitar work glides along and spikes, matching Stahnke's bursts of frenetic energy. Inspired by the grunge and riot grrrl movements, Punch Drunk Tagalong's live shows allow their frenzied instrumentals to come alive while paired with their intimate songwriting. (Michael Wu)

A singer-songwriter from Hernando, Mississippi, Matt Hectorne has been writing songs since he was 10 and played in bands throughout high school. He moved to Northeast Ohio on a whim almost a decade ago. In addition to playing with local folk rockers Humble Home, who have since disbanded, he's released solo albums for the past five years and put out a couple of EPs and a full-length album. Hectorne's new album, Work, shows off his songwriting chops. With their cooing vocals and slide guitars, songs such as "Only Way Into Your Heart" and "It Don't Matter at All" have a Wilco vibe to them, and the mellow title track possesses a Grateful Dead feel. In Hectorne's talented hands, the songs come across as natural roots rock explorations. Expect to hear many of Work's songs when Hectorne and his local backing band play tonight. (Niesel)

Herzog is a band that draws from indie '90s pop and rock. The Cleveland-centric band first got national recognition when NPR chose its tune "Silence" as song of the year in 2011, just one year after they formed. Now with three consistently solid albums, the band's active and mellow sound will have you feeling warm, lively and wanting more. Popular tracks such as "Mad Men" and "Full Stick" are songs you can play on a loop. Listen for subtle references in their songs to known Cleveland areas including the Rock and Roll Hall of Fame and West Boulevard. (Poshedley)

Don't expect to stand still during Fruit and Flowers' set. Hailing from Brooklyn, New York, the band excels at propulsive drums and endlessly catchy guitar riffs with lead vocalist Caroline Yoder's slick voice easily cutting through. On their latest release, Drug Trax, the band channels fuzzy warm weather days with a healthy dose of ennui through its stealthily gloomy take on the normally upbeat surf rock sound. Highlights from their new album include lead single "Out of Touch" and also "Subway Surfer," a track built for sticky summer hours spent on New York City public transportation. The four-piece has steadily built its onstage confidence by touring around the country. They were even named one of "NYC's Hardest Working Bands" by concert aggregator Oh My Rockness. (Michael Wu)

In the early days, Atlas Genius used to play cover tunes in the clubs in its Adelaide, Australia hometown. After building a home studio in 2009, the band recorded "Trojans" and then independently released it as a single. Buzz began to build immediately for the song that starts with soft vocals and then escalates into a catchy, mid-tempo pop tune that sounds a bit like a more refined version of the Strokes. The band's success is all the more remarkable when you consider it didn't have much support in Adelaide, a city of just more than a million people that supports drinking and gambling more than live music. (Niesel)

What tentatively started a few years ago as a pairing between veteran Cleveland musicians Tim Parnin (Cobra Verde, Sweet Apple, Chuck Mosley) and Chris Allen (Rosavelt), has now blossomed into a fully-formed rock four-piece. Finally putting out their debut record Stranded in the Future last summer, the guys brought in drummer Gerry Porter and bassist Dave Padrutt and have been performing hard ever since. As the album suggests, Falling Stars believes in the power of classic rock and good storytelling. Plus, their guitar riffs are able to wail passionately without getting too obnoxious. Their tune "Another Wrong Way Out" is certain to get the crowd singing at this year's Brite Winter. (Laura Morrison)

Automatic Weapons, multi-instrumentalist duo Vinny DiFranco and Michael Bashur, hail from Ohio Sky, which scorched Northeast Ohio with an ethereal blend of heavy riffs and soaring soundscapes for about a decade. As that band's activities fizzled, the two musicians took their downtime jamming into more defined direction. Released last year, Young Lovers/Dystopian Future stems from lengthy sound experiments at a home studio in Gates Mills. Surrounded by guitars, cameras and a warm, wooden ambiance, the guys ran sounds through an old Hammond Auto-Vari analog drum machine. What came out on the other end were polyrhythmic backbones that formed the genesis of the vibrant new material. (Eric Sandy)

Ever since Ray Flanagan & the Authorities launched in late 2012, the group has emerged as one of the better indie acts on the local circuit. Flanagan admits he's been inspired by roots rockers such as Bruce Springsteen, Tom Petty and Neil Young, but he also cites Metallica and Pantera as influences and admits that his music tends to be "a little more aggressive." Flanagan is a fantastic guitarist and watching him play live at Brite Winter will be a real treat. (Niesel)

The Dreemers
11:40 p.m.
Ports Petroleum Stage at Music Box Down

Pay no attention to this Akron act's misnomer of a name. This isn't some dreamy, hippie bullshit group; instead, the Dreemers are one of the most raucous and riotous band around. As the group told Scene late last year, "We'll have a punkier song or a bluesier song and then throw some kind of riff at the end, and it will go into doo-wop or some other genre. We just jam a lot and when we do that we blend styles together." And all of those styles can be heard on the group's recent debut album Beach Mode, which is by far one of the most fun locally released records of last year. The three-piece, together since 2015, could easily roll into schtick territory with its mix of vintage sounds and over-the-top personas, but it somehow manages to keep it fresh and in the now. (Morrison)

Closing act Marcus Alan Ward is here to melt your mind with his progressive and powerful arthouse pop. But he wants you to dance your ass off too. Take, for example, his latest original track "BodyFeelGood," which melds groovy beats, goopy bass and techno. Listen to it long enough and you'll realize how much technically is crammed into the track, but no matter how complex all it makes you want to do is move. The much-buzzed-about artist is certainly due for a new record, and here's to hoping 2018 sees that release. In the meantime, just float along with his current repertoire. (Morrison)