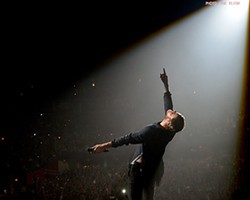 When Imagine Dragons played the Q back in 2015, the band made one heck of an entrance. As it emerged from behind a giant white curtain at the 90-minute show’s start, frontman Dan Reynolds sauntered up the catwalk to the center of the floor where seating was general admission.

There, he slapped high fives with the patrons as he belted out the notes to “Shots,” which, with its upper register vocals, sounded a bit like a cross between 90125-era Yes and Coldplay.

Expect another high-energy performance when the band brings its Evolve Tour to Blossom on June 17. Fourteen-year-old singer-songwriter Grace VanderWaal will open the show.

Fans can register now for free access to the Ticketmaster Verified Fan presale which will allow vetted fans to purchase beginning at 10 a.m. on Tuesday.

Tickets go on sale to the general public at 10 a.m. on Saturday, March 3.