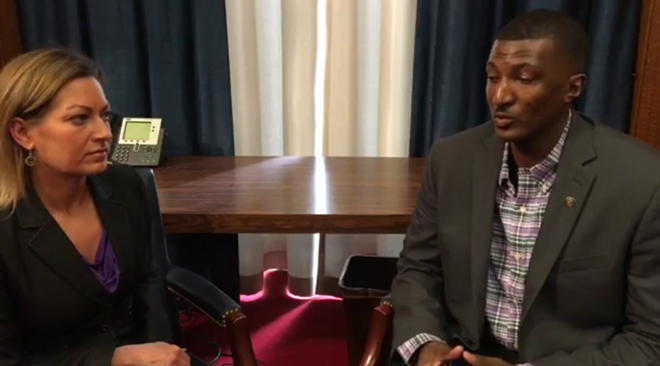 Sgt. Vincent Montague is the new president of the Black Shield, the African-American Cleveland police union, replacing Lynn Hampton. After a split 58-58 vote in December, Montague won after drawing the higher card from a deck in January in a tiebreaker.

In 2013 Montague shot an unarmed man in the chest during an incident downtown after the man attempted to turn down West Sixth Street when it was closed to through traffic. That shooting was covered in-depth in a March 2014 Scene cover story. Gregory Love, the victim, survived and later reached a $500,000 settlement with the city of Cleveland after filing a lawsuit.

The Black Shield was first formed in 1946 as a social club of sorts and is one of the oldest minority police unions in the country. What started as a place where minorities could go for camaraderie and support, whether it was getting a fair shake in the hiring process or a promotion, took on serious cultural issues as civil rights battles exploded in the 1970s. Two landmark cases in Cleveland, in fact, started with the Black Shield, which sued the city in 1972 over fair minority hiring practices and again in 1975 to get more women on the job. Its size and relevance has ebbed and flowed since then, experiencing a downturn with poor leadership during the Mike White era. (A November 2000 Scene cover story has much more on the history.) The Black Shield has most recently clashed with the CPPA over the union's endorsement of Donald Trump, among other heated issues with racial undertones.

Outgoing Black Shield President Lynn Hampton contends ballots weren't mailed out to all members and that those issues should have been remedied before proceeding with a tiebreaker. Regardless, he hopes Montague continues the sort of outreach — both to City Hall and the community — that Hampton says is at the heart of the Black Shield's mission.

"Some guys wanted a new start, a fresh start, and that's his thing," he says.

The department announced Montague's new position in an interview with him on Facebook, which you can watch here.