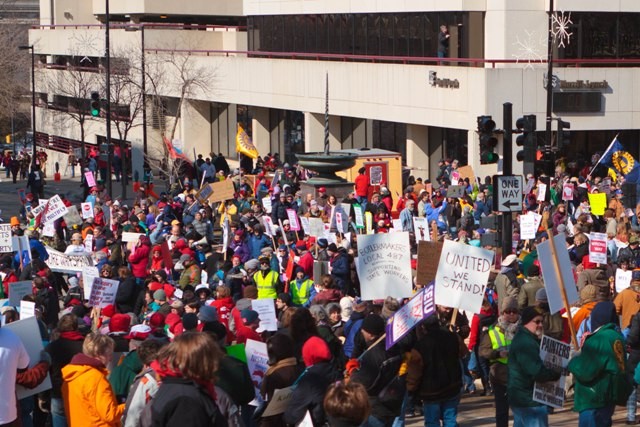 COLUMBUS, Ohio - Hundreds, possibly thousands of Ohio workers will join others from around the country on Saturday for rallies they say are meant to defend the American dream.

On the "Working People's Day of Action," they're calling for equitable pay, affordable health care, quality schools and vibrant communities. Director of Cleveland Jobs with Justice Deb Kline explains the national event is just a couple of days before the U.S. Supreme Court hears arguments in Janus v. AFSCME, a case that challenges the right of unions to collect fees from nonmembers.

"The forces behind this case want to basically take away working people's opportunities and rig the system against us," Kline insists. "So, that's why we are coming together to raise our collective voices, so that people are aware of what's going to be happening."

If the Supreme Court rules in favor of the plaintiff, opponents argue that employees would benefit from the work of unions without paying for representation, which Kline says would weaken the power of organized labor.

Ohio's rally takes place at noon on Saturday at the Statehouse in Columbus.

Kline says Ohio workers will stand in solidarity with those in more than two dozen cities, including Memphis, Tenn., which is marking the 50th anniversary of the historic sanitation workers' strike.

"There were two sanitation workers who crawled in the back of a sanitation truck to get out of the pouring rain, and the truck actually crushed and killed them," she explains. "That's what tipped off the sanitation strike down in Memphis. Martin Luther King went down and gave the speech, and he was assassinated."

Martin Luther King, Jr., spoke before thousands of workers striking to protest poor working conditions and pay on Apr. 3, 1968. He was killed the next day.

Kline says the Working People's Day of Action will demand the same freedoms for workers that Dr. King fought for.