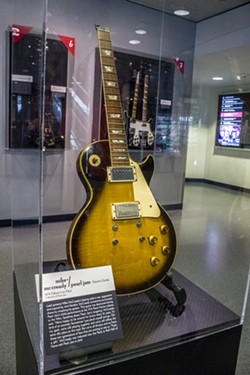 The Rock Hall held a press conference this morning to announce that is has recently put new items from Rock Hall Inductees Heart and Pearl Jam on display.

The Rock Hall had the two new items from Heart — a Kramer American Series guitar played during the 1988 Bad Animals tour (the cave drawing-like character on the body is an abstract depiction of Nancy Wilson from the Bad Animals LP cover) and a suede dress worn by Ann Wilson on tour after the release of Heart's debut album, Dreamboat Annie — on loan, but the Wilson sisters recently donated the items, so the Rock Hall would own them.

They're displayed in a first-floor exhibit that also features items from David Bowie, the Supremes, Bruce Springsteen, Metallica and Michael Jackson.

"These two pieces from Heart are great and we've actually had them since before the band was even inducted," says Meredith Rutledge-Borger, curator for the Rock & Roll Hall of Fame. "We had a Nancy Drew-investigation to figure out what the symbol on the guitar represents and it's supposed to symbolize Nancy."

Additionally, the Rock Hall put the busted-up guitar used by Mike McCready during Pearl Jam's 2008 performance at the VH1 Rock Honors tribute to the Who on display inside the Guitar Gallery on the museum's second level. It's on display next to guitars from Eric Clapton, Jerry Garcia, John Lennon and Kim Deal. Pearl Jam was inducted last year.