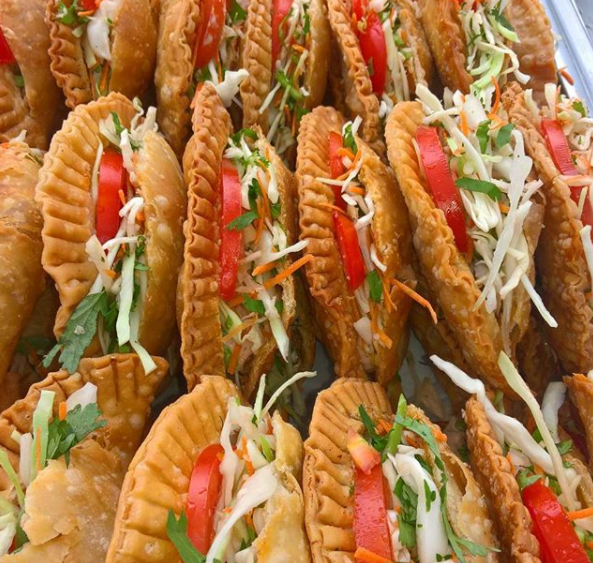 Lyz Otero wants to make food that satisfies. Which is why she often catches herself watching customers when they first take a bite into a Half Moon Bakery empanada or sandwich.

"Just seeing the look on people's faces when they bite in," Otero says, "there's truth right there. I can tell if they think it's good or not."

And after eating a golden-brown Half Moon Bakery empanada — available through the end of the month at Forest City Shuffleboard — you have to wonder how she and husband/business partner Gerson Velasquez manage to pack so much flavor into something so small.

Now after three years of perfecting their recipes, catering lunches and hosting various pop-up events, the pair are starting a brick and mortar take-out bakery of their own in the Clark-Fulton neighborhood (3460 West 25th and Marvin), right across from MetroHealth Medical Center. Otero says they're shooting for an April opening.

With the help of Economic and Community Development Institute (ECDI), which helps women- and minority-owned businesses, the two were finally able to procure a permanent location after a Brooklyn Centre spot fell through.

Otero and Velasquez both currently work at a Lebanese restaurant downtown, and have cooked under some of the finest chefs in Cleveland. Opening their own spot is almost unreal, Otero says.

Otero, who moved to Cleveland from Puerto Rico when she was 13, says she takes recipe ideas from everything she eats. And the couple's three children reap the benefits of her experimentation.

"One night I ran out of corn tortillas for tacos," she recalls. "So I asked the kids if it would be alright if I use empanada shells instead."

The result, combining the Mexican staple with a fried, flaky shell, was a hit right off the bat. The bakery's empanadas now come in 15 varieties, including Argentina, taco, pizza, gluten-free and vegetarian.

The new bakery is set to feature the business' signature half-moon-shaped items, but will also include cakes, fresh bread, pastries and a rotating lunch menu. The spot will only be open for breakfast and lunch.

Check out the current pop-up menu below: