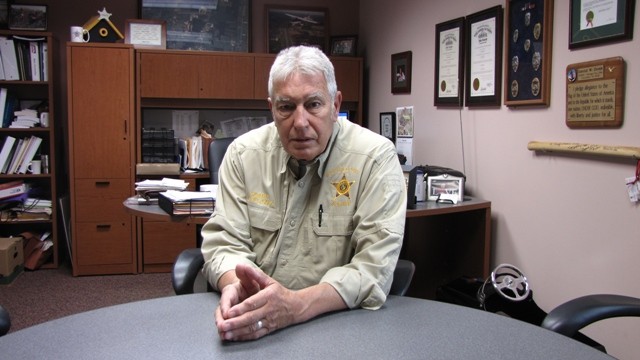 One part of that increase is a rise in detainer requests from Immigration and Customs Enforcement (ICE), the federal agency that enforces immigration laws and deports unauthorized immigrants.

Detainers ask local, state and federal jails and prisons to hold suspected unauthorized immigrants for an additional 48 hours so ICE can pick them up and begin the deportation process.

The Trump administration needs the help of local law enforcement for its crackdown on immigration, but complying with detainer requests is not required by law. Communities that do not comply are referred to as "sanctuaries."

In Ohio, though, sanctuaries are hard to come by, as law enforcement regularly complies with ICE's requests to pick up immigrants for deportation.

Through a hard-fought series of Freedom of Information Act requests and court victories, TRAC has compiled a database of every ICE detainer received by local law enforcement agencies across the nation for about the last 15 years.

TRAC's records for Ohio are current through July 2017 and go back to November 2002. Since then, ICE requested the transfer of more than 27,000 undocumented immigrants from city jails, county jails and state and federal prisons in nearly every county in the state.

County jails received the majority of those detainers, accounting for 71 percent of the total.

The top county for detainers, Franklin, is Ohio's most populous with more than 1.2 million residents. When adjusting for each county's population, Franklin is still first for detainers, but that is where the correlation ends.

ICE withheld most information about the detainers and the immigrants named in them. The agency released limited information that included the person's gender and citizenship.

More than 63 percent of the immigrants on the detainers were originally from Mexico. Next came Guatemala at 9 percent, while 4 percent were from Honduras. Nearly 97 percent were male and only three percent were female.

One important piece of information that ICE included, though, was whether some detainers were refused. ICE provided outcomes for only about a third of the detainers sent to Ohio law enforcement agencies, but in more than 98 percent of those cases, ICE said the agencies did not refuse the detainer.

Bob Cornwell, the executive director of the Buckeye State Sheriffs' Association, said it is common practice for county jails in Ohio to hand over unauthorized immigrants to ICE.

"Policies have remained fairly consistent over the years," he said.

Portage County Sheriff David Doak agrees with Cornwell, and said his deputies and correctional officers are instructed to comply with ICE. His jail received 56 detainers and did not refuse at least 30, according to TRAC.

One byproduct of illegal immigration Doak sees firsthand is drug trafficking, particularly coming across the Mexican border with the United States.

"Trump took issue with that politically," he suspects. "He made a stand with that, and once he committed to it he was kind of obligated to follow through. And we're beginning to see the extent of that."

"It's caused jail overcrowding, deaths, the list could go on," he said. "(Drugs have) been coming across the border for years, and law enforcement has taken a pretty tough stand."

Doak believes this is why Trump has prioritized illegal immigration. He also expects ICE to pay more attention in rural areas where law enforcement has not had much interaction with unauthorized immigrants, like Portage County.

"I can almost assure you if we picked someone up now and called ICE," Doak said, "they would probably come and get them without delay."

The sheriff's office actually has no official policies regarding ICE or unauthorized immigrants, because of its irregular interactions with them.

"It's not something in the past that was earth-shaking," he said.

With Trump's increased crackdown, though, the sheriff's office is looking into implementing policies specifically related to ICE and unauthorized immigrants. Some policies Doak's office is drafting would decide whether to hand over unauthorized immigrants who are witnesses of crimes and whether the Portage County Jail should begin to track the citizenship status of its inmates.

Though Doak, a Democrat, is committed to upholding the law by complying with ICE detainers, he is sympathetic when he talks about the families of the immigrants handed over to ICE for deportation.

"I just morally think that it's wrong to split families up, take children or parents and deport them and split the family up," he said. "On the other hand, those folks know that when they cross the border illegally, there's consequences to that, and they have to take a little bit of ownership in that."
As the Trump administration increases its crackdown on illegal immigration and law enforcement agencies in Ohio try to keep up, one thing is clear: If an unauthorized immigrant is taken into custody by a law enforcement agency or is sitting in a cell at a jail or prison, their days in the U.S. are likely numbered.

"If they were here illegally," Doak said, "we would probably be contacting ICE."