Formed in New York at the end of the '70s, the Fleshtones took their inspiration from bands such as the Seeds and Standells rather than their CBGB contemporaries such as Television, Talking Heads and the Ramones. The veteran group's most recent album, 2016's The Band Drinks for Free, commences with the swaggering organ-driven "Love Like a Man" and keeps the energy level high with rave-ups such as "Love My Lover" and the rowdy, Blasters-like "Suburban Roulette," songs that should translate well live. (Jeff Niesel), 8:30 p.m., $15 ADV, $17 DOS. Beachland Tavern.

A producer/artist blind date helped singer-songwriter Jessica Lea Mayfield make the decision to work with John Agnello (Kurt Vile, Sonic Youth, Dinosaur Jr., Phosphorescent) on her latest album, Sorry Is Gone. He helped assemble the band that plays on the disc. The group includes Seth Avett on backing vocals and keys, drummer Steve Shelley (Sonic Youth, Sun Kil Moon), bassist Emil Amos (Grails, Holy Sons) and guitarist Cameron Deyell (Sia, Streets of Laredo.) A song that sounds like it could be on a PJ Harvey album from the '90s, the disc's opener, “Wish You Could See Me Now,” features distorted guitars and hoarse vocals. Another highlight, the ballad “Soaked Through,” possesses a Mazzy Star vibe with its ethereal vocals and ominous sounding drums. "He shook me and he cried and he said, 'Please stay,'" Mayfield sings, clearly referencing a personal experience. Expect an emotional performance when Mayfield performs tonight at Mahall's. (Niesel) 8 p.m., $15. Mahall's 20 Lanes.

Fans familiar with the Oh Hellos' eclectic folk rock style won't be disappointed with their latest EPs that are ripe with the familiar picking and riff style from Tyler and Maggie Heath's vocals that sit atop the familiar ever-building crescendo of instruments and sing-along jamboree vibe from their bandmates. It all serves as the underpinning of the lyrical questions they are posing to themselves and their listeners. (Lauren Daley-Maurer), 8 p.m., $18 ADV, $20 DOS. Beachland Ballroom.

Yiddishe Cup, a Cleveland Heights-based klezmer band that's been around for as long as we can remember, recently changed its name to Funk a Deli and will now broaden its musical palate. The newly christened group, which plans to mix Klezmer and Motown, will play its first west side gig in 23 years when it performs tonight at the Bop Stop. (Niesel) 8 p.m., $20. Bop Stop. 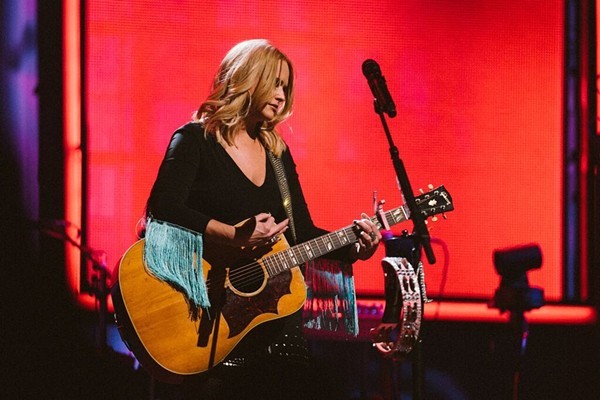 As singer-songwriter Miranda Lambert started to write the songs that would become 2016’s The Weight of These Wings, she says she didn’t have a plan for the album even though she knew the split with former hubby Blake Shelton would inform at least some of the songs. As she began to write and record the disc, she found the songs falling into one of two categories. As a result, The Weight of These Wings became a double album, and Lambert called one disc “The Nerve” and the other “The Heart.”  Expect to hear songs from both sides of the album when Lambert performs tonight. (Niesel) 7 p.m., $39.75-$59.75. Wolstein Center.

Members of the locally based White Buffalo Woman originally started skateboarding with one another before they formed the band in the basement of a funeral home in Minerva with the goal of "fusing rock, blues, psychedelic and soul into an explosion of new music." Earlier this year, the band, which has released a few albums through a small Nashville-based label, lined up a spring tour and decided it needed to hurry up and record an album. For the resulting full-length, Foolish Hearts, the band worked again with Pete Drivere, who recorded and mixed the album at Ampreon. It's another solid effort. With its snotty vocals, album opener "Love Resolution" comes across like a vintage Joe Jackson tune, and the stuttering vocals and twangy guitars in "Cryin' Shame" make the track sound like a '60s bar ballad. (Niesel) 8 p.m., $8. Musica.

That 1 Guy (real name Mike Silverman) is a classically trained double bass player. At one point, he felt that the instrument restricted his musical creativity. Instead of trying to switch to a new instrument, he decided to design his own. Silverman then handcrafted a series of what he calls "magic" instruments, including a giant steel pipe, a cowboy boot, and a hand saw. Silverman’s solo act weaves in and out of jazz, funk, progressive, and experimental rock. On stage, he provides percussion, plays his inventive instruments, sings and cues up samples to fill in the rest. The end result is a very unique, bizarre, virtuosic version of a one-man show. (Johnny Cook), 9 p.m., $15. Beachland Tavern.