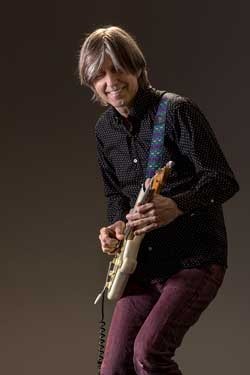 For years, singer-guitarist Eric Johnson has received requests from fans who wanted to hear him play his 1990 album, Ah Via Musicom, in its entirety.

As a result, the bluesman recruited drummer Tommy Taylor and bassist Kyle Brock, both of whom play on the album, and he booked a tour that will feature a set devoted to the album. Johnson will also play material from his extensive catalog, including last year’s Collage.

The tour, which also features jazz/rock/pop singer Arielle as the opening act (the two also collaborate during the concert), comes to House of Blues at 8 p.m. on Tuesday, March 13. In separate interviews, Johnson and Arielle talk about their friendship and what to expect from the live show.

How do you and Arielle know each other?

Johnson: I met Arielle in Nashville, and then I started listening to some of her songs online. I was impressed with her songs and singing. We wrote some songs together and then did some tours together. She recorded a few songs on my new record, and we work together really well.

Arielle: It was one of those meant-to-be things. I was living in Nashville at the time. My roommate had the same booking agent as [Johnson]. He had tickets to the Hendrix Experience tour. I didn’t know anything about it. I just showed up with my roommate. Eric was there along with other people I had worked with in the past. I was making my rounds and saying hi to everyone. I saw Eric, and we started talking about modern-day music, and I told him to check out my music. He called me the next day and said he liked my music. I think my favorite thing about Eric’s music is his note choices. I love how both on guitar and vocally he is constantly surprising me and his audience with melodies that you would never expect and different combinations of notes that I’ve never heard. He does that over and over again. I like the clean sound he gets in his harmonics. He uses elements in his songs that make him unique and special. What was it that first inspired you to become a musician? Johnson: I always heard music while growing up. My dad was playing music from when I was really small. I remember seeing Elvis Presley on TV. Later, it was the Beatles and Rolling Stones and the Yardbirds. I took piano lessons when I was young and went to see classical concerts too.

Arielle: I saw a video of Queen when I was 6. Everyone paid attention to [singer] Freddie Mercury, who was amazing. I saw [guitarist] Brian May, and I thought, “Who is that guy with the Afro and that awesome looking guitar?” I thought that was the coolest thing in the world and what I wanted to do. I’m now good friends with Brian May. It’s another one of those meant-to-be things. He’s amazing.

What was it like to grow up where you did and how did that influence your music?

Johnson:I grew up in Texas and loved country music, old school country music. I like George Jones and Hank Williams. There was that, but there was also a rock scene there too. I got to hear them a lot of bands like that. I think there’s a lot of blues influence there in Texas in its own right. It’s like Kansas City or St. Louis or Chicago. It’s just in the blood.

Arielle: I grew up in Northern California. Both the ’60s and ’70s style singer-songwriters and jam bands had an influence. Heavy metal came out of there. I was surrounded by those influences. I was off doing my own thing, but the whole thrash movement came out of there. There was a lot of power metal going on that added a harder edge to rock music, which is where I kind of began.

How difficult was it to make your first album?

Johnson: It was a little bit of a challenge. I didn’t have an idea of what I wanted to do. I was kind of a novice at recording the studio.

Arielle: I did an instrumental weird thing first, but California was my first major release. I had a record label and they spent a lot of money and promoted it. It represented where I was in my life. I was with a record label that didn’t understand me. In the songs, I speak about how my goals were changing me. It was a bittersweet moment. I had a song on the radio, but I felt very trapped in my life. It was easy to make. I thankfully don’t have issues with doing stuff. I write so often. I work hard, but if things don’t come out naturally, I stop and then start again when they do. Records have never been challenging to make.

Did you try to do something different with your latest release?

Johnson: The only thing different with [Collage] was to try to cut it live as much as possible. That was really my goal. I just grabbed whatever music was available at the time to try to rehearse that and get better at spontaneous recording in the studio. I just used my own studio in Austin. I had my gear there and guitars, so I could just use whatever I felt was working. It’s like being in your own living room. I just ended up recording some tunes from other people that I always enjoyed. I tried to rearrange them and put my own signature on them.

Arielle: Well, as an independent artist now, EPs tend to be the most affordable. They keep the fan base happy. I don’t have to wait. The whole idea is to take the music and name it and summarize the theme when I was writing it. My Gypsy Heart, which came out last year, was about not feeling like I belong anywhere and having a strong desire to travel and explore. My newest one, Mind Lion is about overcoming the ferociousness and untamed nature of the mind and how it can do damage if it’s not utilized properly. They all have themes. I constantly change things around. The music is pretty broad. There’s a commonality which is the heart of what I’m saying. I stay the same even if I play jazz one second and rock the other.

Talk about what the live show will be like?

Johnson: Arielle opens and then we segue into me playing tunes off different records. We take a break and them we play the whole Ah Via Musicom record live from start to finish. It’s been cool to revisit it. I’ve done one song here and there but not the whole record. It’s kind of fun. There’s a lot of room for improvisations. It’s been great. I get to play with [drummer] Tommy Taylor and [bassist] Kyle Brock from the record, so that’s nice.

Arielle: I get a 25-minute set. I have everything from singer-style jazz. I start off with “Summertime.” I have some bluesy stuff. I switch guitars a bunch and I have pedals I use. I build some tracks on those for a song or tow. I have a piano song that I play and at the end, I rock out with an instrumental guitar track with a guitar I built. It’s a wide range of music in a short amount of time. I play a few songs with Eric during his set too. We have a lot of things in common. Musically, we approach music from the same place even if it doesn’t sound the same. We’re both vegetarians. That makes life really easy. He’s pretty straight edge, and I am too, and that helps too. The dynamic of being on the bus makes life easy. We have similar demeanors. We’re quiet and not demanding and don’t have a lot of ego. It’s an easy dynamic.