Bac Asian Bistro in Tremont to Close, Trio to Open in its Place by Early Summer

With the forthcoming opening of Ninja City in Detroit Shoreway, owner Bac Nguyen has decided to close his flagship restaurant in Tremont to focus exclusively on the new venture. After an admirable eight-year run, the business will close on Saturday April 14.

“That place is my baby,” Nguyen says of the closure. “Me and my family put our hearts and souls into that place. It allowed us to pivot from what we were doing at other restaurants earlier.”

That pivot eventually led to Ninja City, which showcases contemporary riffs on Asian and Asian fusion foods. With the looming closure of the Tremont eatery, Nguyen says that he will likely include more Bac staples on the Ninja City menu. Already there is some overlap, he points out, but he might introduce a “throw Bac” section that rotates in some favorites. Nguyen is estimating a late spring or early summer opening.

The prime Tremont spot will not remain vacant for long. Already a deal is in place with chef Anthony Scolaro, who along with partners Meghan Pender and Anthony DiPetta will open Trio, a modern American bistro. 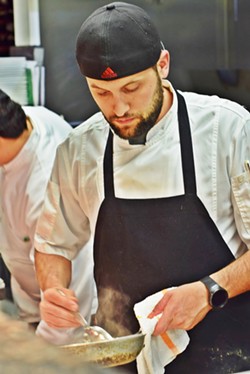 For the past four years, Scolaro has been working to elevate the culinary scene in Medina, where he and his partners run the popular One Eleven Bistro (2736 Medina Rd., 330-952-1122). His goal when opening the business, he explains, was to bring a little taste of Cleveland to his hometown city.

“In Medina there was a lack of what Cleveland has to offer in terms of adventurous dining – even just independent restaurants,” says Scolaro. “Our goal was to bring a little bit of that down this way.”

Over the course of four years, the chef proudly says that not only has his restaurant incrementally pushed his clientele forward gastronomically speaking, it has motivated others in the Medina restaurant scene to do so as well. Looking ahead, the chef has his sights set on even more progressive fare.

“When this opportunity in Tremont came up, it was kind of a way for us to do all the things that don’t necessarily fly down here,” he says. “The opportunity kind of fell in our lap and we decided to take it and run with it. That’s the nature of this business in a way. Tremont is a mainstay and I think we can use that ‘new kid on the block’ thing for a while to hopefully get people interested.”

After getting the keys in mid-April, the chef expects to spend about two months revamping the interior. The kitchen requires some extensive modifications, the bar will be modernized, and the dining room will undergo some cosmetic work as well.

When Trio opens in June it will do so with a concise menu of modern American food that changes frequently. The ingredient- and technique-driven eatery will also offer early happy hour, tasting menus and daily specials.

“The only reason that we’re able to even attempt this is because the staff and team that we have already in place,” he says.