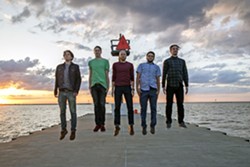 Led by Conor Standish of Burning River Ramblers fame, local indie rockers Front Porch Lights draw upon "the grit of their Rust Belt roots to create a listener experience both lively and emotional," as it's put on their Facebook profile.

The band has just announced that it'll perform with Mimi Arden and Mich at 9 p.m. on Friday, April 6, at the Grog Shop to promote its new single, "All My Money."

The concert will also feature a custom light show that has never been seen in the States. For the light show, the group has partnered with the Austrian lighting company MK Illumination, which will provide the group with special lights for the gig.

Tickets to the concert cost $10.