The Shadowboxers Relish Opportunity to Open for Mentor Justin Timberlake 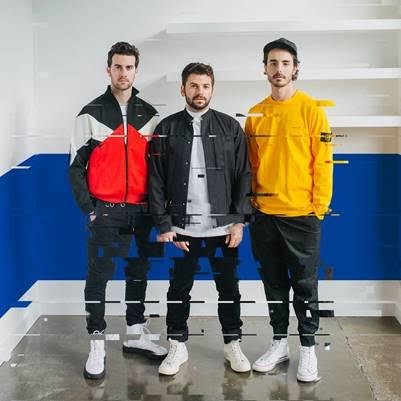 The Shadowboxers — singer-songwriters Scott Tyler, Matt Lipkins and Adam Hoffman — met nine years ago in college in Atlanta and began performing at events and parties.

Like many bands, they mostly played cover tunes as they tried to find their original sound. Once they graduated from college, they moved to Nashville and continued to refine their pop/soul sound.

"Our biggest influence is soul music from the '70s and '80s — Jackson Five, Stevie Wonder, Earth Wind and Fire, all that good stuff," says Hoffman in a recent conference call with Tyler and Lipkins. "We're also really influenced by '90s hip-hop and a lot of current music as well."

"We wrote original music from the very beginning, but no one cared about it, so we had to play covers," adds Tyler. "We were writing intricate harmony songs that we would try out at writers' nights, but then we would turn around and play parties, and we'd have to play songs that people would dance to. That was one of the reasons why we wanted to write up-tempo songs. We wanted to work those into the set lists."

He describes playing covers as a "learning experience."

"We owe our identity to that," he says. "We had to make songs our own. We never cover a song straight-up. You have to make them your own."

On a whim, the band covered Justin Timberlake's "Pusher Love Girl" and posted the track on YouTube.

"We were sort of in a lull with our musical output, so we decided that the first Tuesday of every month, we would put out a cover of a song we love," says Tyler. "It wouldn't be a song of the moment. We wanted find a way to get to people and to show who we were. The first song was by CSN and the second was Paul Simon. We did Haim and then we did 'Pusher Love Girl' because the [2013 Timberlake album] The 20/20 Experience had just come out and then we did songs by Frank Ocean and Ladysmith Black Mambazo. We did Stevie Wonder. We did all kinds of songs that we love."

Timberlake heard "Pusher Love Girl" because the guys tweeted to him about it, not really thinking he'd respond. He took them to dinner and signed them to his record label. He's even produced their new EP, Apollo, and has enlisted them to accompany him on his current tour. The band will open for Timberlake when he performs at 7:30 p.m. on Saturday, March 31, at Quicken Loans Arena.

"One of the reasons he reached out was because he heard the other covers and saw that we have similar tastes," says Tyler.

The guys describe the dinner with Timberlake as something surreal.

"We shot the shit for an hour-and-a-half," says Hoffman. "After we talked for a while, he said he wanted to help us in whatever way he could and be our big brother. From that point on, we started writing and recording every single day. We sent him demos and he sent back feedback. He wanted to produce. We got in the studio, and it all came together."

Working on Apollo with Timberlake and K-Kov, who also produced it, proved to be an eye-opening experience.

"One of the coolest things about the recording process was to have Justin and K-Kov in the room," says Tyler. "That added another ingredient to the pot. We've been writing together and playing together for over nine years. We feel like we tried every combination of our voices and abilities. That's a good thing, but it was kind of limiting because we subconsciously created boundaries for what we could do. They shattered those boundaries. They had us do things that are much bolder. The songs have more swagger and confidence than they would have had if it were just the three of us."

"The end result is that from the intro to the lyrics to the way it adds rhythmic layers and energy, it's as much of a punch as we can throw," says Tyler. "We brought in a lyric — the 'if it's only love' part. I thought that would be the chorus. We made it the verse, and we had to write a better chorus. The rest of the song had to elevate. It was like if we opened with our closer and everything behind it has to be better. We had that mentality going in."

He says the band has struggled to capture the energy it displays on stage in the studio.

"We played 300 or so shows before we ever recorded a song," says Tyler. "That's the opposite of what most bands do. Our live show is where we're most comfortable. This time was the first time we could get recordings that have that energy of what we do live."

By the year's end, the group will have played arenas with one of the biggest pop stars in the world. How will it ever top that?

"I think we don't want to get too ahead of ourselves, and we want to focus on the tour and deliver in the best way we can," says Tyler. "We have a lot more material we're excited to release after the EP. This is the start of the train moving, and we want to keep it going for as long as possible. We want to release more music and tour on our own and hopefully this will all have it build on itself. We have no plans to stop. This bus is staying on the road."