MetroHealth Will Have Fewer Total Beds After Campus Transformation, But Increased Capacity for "Worst Case Scenarios" 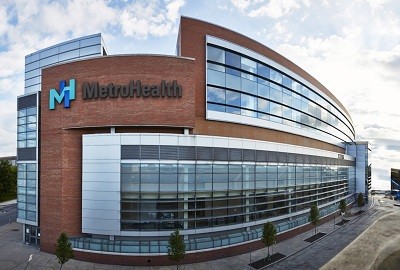 After the $950-million transformation of the MetroHealth main campus, tentatively scheduled for completion in 2023, the hospital system will have fewer total beds.

That fact, including the significant reduction of beds at the main campus, is sitting uneasily with ground-level service providers like nurses and EMTs, who wonder if the bed reduction could make their jobs more challenging.

The main campus currently operates 450 staffed beds, which includes 85 acute care beds in the Critical Care Pavilion, completed in 2016. After the transformation, the main hospital building will have only 355 staffed beds, (270 beds, plus 85 in the CCP).

Walter Jones, MetroHealth's Senior VP for Campus Transformation, told Scene by phone that he's heard this concern quite a bit since he arrived in 2014. He said that while there will be a reduction in the number of beds at the main campus, there will be an increased number of beds at satellite health centers, including 28 new beds at both the Cleveland Heights and Parma locations. Additionally, there are currently about 40 beds at the Old Brooklyn Health Center, and that number could increase to about 60.

"The whole organization is really transitioning to a 'system' type of thinking," he said, "so the appearance of how certain aspects of changes at any one site... I don't want to say 'misrepresent,' but there may be a misunderstanding of why that's being done in relation to how we're growing system-wide."

Jones said decisions about the number and location of hospital beds have been made in the interest of improving access to healthcare for people across the county.

"Sometimes that means not wanting to bring them all to the main campus," he said. "Sometimes people are better served in the communities they're adjacent to."

In response to concerns about capacity after emergency events — hospitals need to be prepared to care for populations on the worst day, not just an average day — Jones said MetroHealth's capacity in that regard will be "dramatically increased."

"Each one of 85 beds in the Critical Care Pavilion is a private room, equipped so that we can double the capacity in the event of an episodic surge — a major accident or flu outbreak. We're looking at the same strategy as we design the new hospital. So from a surge strategy, for worst-case scenarios, we're increasing."

On an average day, Jones said that 350-400 hospital beds are in use across the system, and he said that's the number being targeted in system-wide planning moving forward.

As for internal communication, especially with nurses or other ground-level service providers, Jones said that from his perspective, there has been a "tremendous amount of involvement" not only with staff but with the local community as well.

He said that last week he gave multiple presentations, available to all staff members, which reported on the transformation's progress and "helped them understand what's coming next." He said he's in the midst of planning meetings with individual departments as well.

"We know there's a high level of interest," Jones said. "We acknowledge that, and we want to make sure that [staff members] have an opportunity to hear what's going on. They'll obviously see the cranes and the dirt moving, but we don't want the only communication with staff to be the inconveniences."

Jones said he also writes regular updates, some for an internal blog and some for the public-facing MetroHealth website.

*This story has been edited to reflect accurate bed counts. An earlier version said that the Old Brooklyn health center could grow to 90 beds. The better estimate is 60. Also, the 85 beds in the Critical Care Pavilion are included within the total 450 beds that the main campus currently operates.